On the 23rd of June this year Alan Turing would have celebrated his 100th birthday. During his short and tragic life he revolutionised the scientific world and so 2012 was declared Turing Year. We're sad to see that an official pardon for his 1952 conviction for homosexuality, which was then illegal, still hasn't been granted. But that hasn't stopped us from celebrating his life and scientific achievements. See all our articles related to his work below.

If you're a secondary school student then you can join the Alan Turing Cryptography Competition run by the School of Mathematics at the University of Manchester. It involves a story of six chapters, following the exploits of two children, Mike and Ellie, who get involved in a cryptographic adventure involving a mysterious ancient artifact — the Egyptian Enigma! Every two weeks, starting on Monday 7th January, a new chapter of the story will be released on the website. Each of the six chapters contains a code to be solved. Teams of at most four students have to solve these codes as fast as they can and submit their answers on the competition website.

There are some great prizes for the three top-placed teams at the end of the competition. There will also be a prize for the first team to solve each chapter and a number of spot prizes awarded throughout the competition. See the competition website for details.

Alan Turing: ahead of his time

Alan Turing is the father of computer science and contributed significantly to the WW2 effort, but his life came to a tragic end. This article explores his story.

Another look at Turing's life and work. Find out what types of numbers we can't count and why there are limits on what can be achieved with Turing machines.

How does the uniform ball of cells that make up an embryo differentiate to create the dramatic patterns of a zebra or leopard? How come there are spotty animals with stripy tails, but no stripy animals with spotty tails? The answer comes from an ingenious mathematical model developed by Alan Turing.

Omega and why maths has no TOEs

Is there a Theory of Everything for mathematics? Gregory Chaitin thinks there isn't and Turing's famous halting problem plays an important part in his work.

Turing is most famous for his work as a WWII code breaker. This article looks at the efforts of all the code breakers at Bletchley Park, which historians believe shortened the war by two years.

CAPTCHA if they can

A version of Turing's famous test – the "Completely automated public Turing test to tell computers and humans apart", or CAPTCHA for short – helps in the fight against the everyday evil of spam email.

Turing's scientific legacy is going stronger than ever. An example is an announcement from February this year that scientists have devised a biological computer, based on an idea first described by Turing in the 1930s.

AI has become big business in Hollywood, but will we ever see the computers reliably pass the Turing test? Or is it philosophically impossible?

No comments yet
December 19, 2012
Plus Advent Calendar Door #19: How many dimensions are there?

Space is three-dimensional ... or is it? When we spoke to theoretical physicist David Berman in October this year we found out that in fact, we are all used to living in a curved, multidimensional universe. And a mathematical argument might just explain how those higher dimensions are hidden from view.

Kaluza, Klein and their story of a fifth dimension — David Berman explains the concept of dimension and how a mathematical idea suggests that we might well live in five of them.

The ten dimensions of string theory — String theory has one very unique consequence that no other theory of physics before has had: it predicts the number of dimensions of space-time. David Berman explains where these other dimensions might be hiding and how we might observe them.

How many dimensions are there? – the podcast — You can listen to an interview with David Berman as he tells us how Kaluza, Klein and their fifth dimension might help us understand the ten dimensions of string theory.

No comments yet
December 18, 2012
Plus Advent Calendar Door #18: Nriching mathematics

The maths of growth is one of the many topics explored on STEM NRICH.

Want to stop your brain from rusting this Christmas? Then visit our sister project NRICH which received a major make-over this year and now has a beautiful new website. NRICH is aimed at students and teachers of maths of all ages and backgrounds. It offers challenging and engaging activities that develop mathematical thinking and problem-solving skills and show rich mathematics in meaningful contexts.

To train your brain have a look at the NRICH advent calendar, which has an activity for every day up to Christmas, or the regular weekly challenge. If you're interested in real-life applications of maths, then visit STEM NRICH which explores the ways in which mathematics, science and technology are linked. And if you're stuck on a problem or have a general maths question you can ask the team at the Ask NRICH forum.

Because life is too short for long division!

No comments yet
December 17, 2012
Plus Advent Calendar Door #17: Happy Birthday to the INI! The Institute celebrates its 20th birthday this year, having opened in July 1992. We celebrated with a selection of articles exploring some of the research programmes that have been held there. The Institute asked us to produce these articles in 2010 and we were honoured by being afforded this rare glimpse behind its venerable doors. And as you'll see, what starts out as abstract mathematics scribbled on the back of a napkin can have a major impact in the real world. 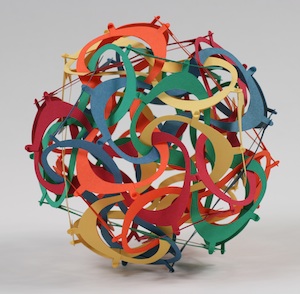 "Eights" by George Hart, featured in this issue of Eureka

Looking for some great Christmas reading? Good news! The annual magazine Eureka has just published its first ever digital issue and to celebrate they have reprinted some of the best articles from past issues featuring authors such as Stephen Hawking, Roger Penrose, John Conway, Stephen Wolfram, Paul Dirac and many others.

You can view Eureka via a free iPad app or download it as a PDF. Happy reading! 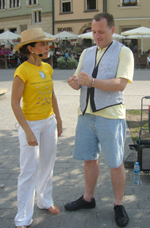 Sara Santos busking on the streets of Krakow.

This summer, while at a conference in Poland, we were lucky enough to watch Sara Santos and her maths buskers perform on the streets of Krakow, handcuffing innocent Krakowians (a punishment for dividing by zero), constructing emergency pentagons, and reading minds. Maths busking is about showing the public the surprising and fascinating side of mathematics through the medium of street performance. Sara Santos is co-founder of Maths Busking, which is both a network of performers and a business delivering training, school and entertainment services. The training sessions are particularly popular amongst teachers, science communicators, and researchers in mathematics and sciences.

If you're interested in maths busking performances or becoming a maths busker yourself, visit the Maths Busking website or listen to our interviews with Sara and other maths buskers in our podcast.