What can we learn from the British successes at the 2008 Olympics? Over the last few years in the lead-up to the London 2012 Games, there has been a massive influx of money and enthusiasm in the UK into Olympic sports and infrastructure. Other countries have shown similar improvement ahead of hosting the game. So is Britain's triumph an early result of the home advantage? And how will Britain perform in 2012?

You've got two more months to join our maths writing competition, the Plus new writers award 2009. 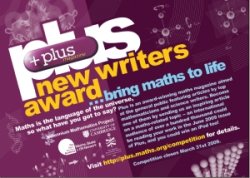 We are looking for the science writers of the future, who can make mathematical subjects lively and interesting for a general audience. Whatever your age or background, if you've got a favourite bit of maths you think the world should know about, then we want to read about it. If you're a teacher or lecturer, then pass this link on to your students — there are special categories for secondary school students and university students.

Winning entries will be read by an international audience of over a hundred thousand in the June 2009 issue of Plus, and the winners will receive an iPod, subscriptions to the journal Nature, and signed copies of popular maths books by some of the best science writers today.

If you think you can share your passion for maths with the general public, visit the competition page and get writing!!

The competition is kindly supported by the Maths, Stats and Operational Research Network, a Subject Centre of the Higher Education Academy.

In May 1609 Galileo Galilei received reports of "a spyglass by means of which visible objects, though very distant from the eye of the observer, were distinctly seen as if nearby." Intrigued, he set about building his own version of this curious device, and he succeeded: by the end of the year he had discovered mountains on the Moon, the moons of Jupiter and the make-up of the Milky Way. His observations revolutionised our understanding of the Universe, and his use of the telescope marked the birth of modern astronomy — which celebrates its 400th anniversary this year.

And of course it is also 400 years since Englishman Thomas Harriot made the first recorded telescopic observations of the moon (on 26th July 1609).

Darwin and the web of life

One hundred and fifty years after the publication of On the origin of species, it seems that one of Darwin's most fruitful ideas, that the course of evolution can be represented in the shape of a tree, is in need of updating. Evidence is mounting that what we should be thinking of instead is a web.

Reconstructing relationships between species from genetic information is a mathematical exercise, as well as a biological one. Darwin's tree of life, as a mathematical object, is an example of a graph, a collection of nodes connected by edges, with the special property that there's only one route between any two nodes. There are no circuits in the graph because it was assumed that genes can only be transferred between parents and offspring. But as Plus reported last year, there is evidence that genes can also be transferred between species horizontally, for example through hybridisation or swapping of genetic material between unrelated species. An article in this week's New Scientists brings together many strands of evidence for horizontal gene transfer. According to the article, the evidence doesn't just concern strange unicellular beasts, but also humans and other mammals: it is estimated that "40 to 50 per cent of the human genome consists of DNA imported horizontally by viruses"!

As a result, many scientists now think that a more general form of graph, a network, is what is needed to describe life. Given the potential complexity of networks, genetics may soon be in desperate need of mathematicians.

Shine a light on dodgy stats 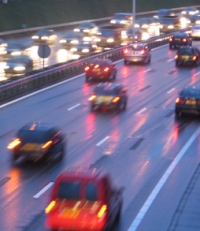 This week both the Daily Telegraph and the Daily Mail ran stories claiming that switching off street lights could significantly increase the number of road deaths. The stories were based on a paper published in the Cochrane Library, which considered three studies into the connection between road accidents and street lighting. However, it seems that the headlines are a typical example of misinterpretation of statistics.

As David Spiegelhalter, Professor for the Public Understanding of Risk at the University of Cambridge, writes on his website Understanding Uncertainty, the studies suffer from three major flaws: poor data, publication bias, and what's known as regression to the mean. Spiegelhalter points out that the three studies underlying the paper were poor and conducted decades ago, with one dating from as far back as 1948 — not a very good basis for drawing conclusions about today's traffic. The term publication bias refers to the fact that studies which show dramatic results are more likely to be published than those that don't. It's quite possible that there were other studies, which found no connection between street lights and accidents, but that no-one bothered to publish such boring results. Regression to the mean is a commonly observed effect, which results from random fluctuations. If street lights were installed on a certain road, then this is most likely because that road recently experienced a spade of accidents. Such a freak period can be purely down to chance, in which case one would expect the accident rate to return to normal after a while. Thus the improved accident rate after the installation of lights may be purely down to chance, rather than the improved lighting.

All this doesn't of course mean that street lights are useless. It simply means that the evidence is nowhere near as sound as the newspaper headlines claim. The Daily Mail, to its credit, did consult an expert, namely Spiegelhalter, but it's probably the headline, rather than his warning, that will stick in readers' minds.

If you're interested in matters of uncertainty and risk, then visit the Understanding Uncertainty website, or read Spiegelhalter's column in Plus. What's that? Is it a bird, a plane? No, it's Plus, and it's new update service on Twitter!!