Watching cyclists struggle through the Tour de France from our armchairs (or should it be deckchairs?) is great fun, but as Burkard Polster and Marty Ross have discovered, it would be even more fun if the cyclists cycled in circles. Cows kill 20 Americans every year. But you can halve your chance of dying of a heart attack by drinking 8 bottles of wine a week. Laugh in the face of death at the new comedy show “Your Days Are Numbered – the maths of death”, either at the Edinburgh Fringe (Assembly@George Street, 5-30th August) or at the last London previews on July 27th (2.30 and 7.30 pm) at the Cockpit Theatre .

Stand up mathematician Matt Parker (winner of the audience award, FameLab 2009, and warm up act for last year’s RI Christmas lectures) and comedian Timandra Harkness (“a deadly wit” – the Scotsman) will cut through newspaper headlines like “Junk Food kills 40,000” and give you the real lowdown on your odds of dying and how you can lengthen them. With funding from the Wellcome Trust, they're not allowed to just make stuff up.

You have a 0.000043% chance of dying during this show, but at least you will die laughing. Need something to read while drinking your coffee?

Caroline Davis from the Maths Promotion Unit told us that today's Guardian Education Supplement is a bumper issue for maths: explaining how maths is taking over the streets, an analysis of why applications for STEM subjects is still and issue, and how Recursive Binary Sequences of Differences can help you pour the perfect cup of coffee….

If you are (or were) an England fan and don't feel like watching Germany's unstoppable advance to take the ultimate trophy, why not use the freed-up time to look at the maths behind the beautiful game: 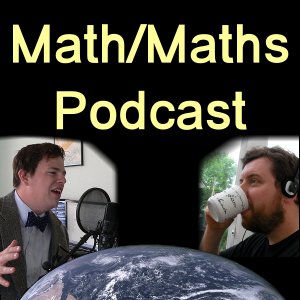 You can forget the spuds, as the far more important math/maths debate may finally be settled with Peter Rowlett's new Math/Maths Podcast: 5136 miles of mathematics. It's a conversation about mathematics between the UK and USA. Peter in Nottingham calls Samuel Hansen in Las Vegas and the pair chat about math and maths that has been in the news, that they've noticed and that has happened to them. The latest episode talks about something close to everyone's hears (or ears) — just why are those vuvuzelas at the world cup sound so annoying. They also discuss putting relativity to the test, the Game of Life and taking maths to the streets.

Peter also produces the excellent Travels in a mathematical world podcast for the Institute of Mathematics and its Applications, and the History of Maths and X video podcasts. (Some say 'vodcasts', I say 'I don't think that one has made it into the lingo yet'!)

Listen to the latest episodes of Math/Maths Podcast, Travels in a mathematical world and watch the latest History of Maths and X.

Our sister site NRICH is celebrating the connections between maths and art with a special issue containing hands-on activities, challenges and articles to get your creative juices flowing. We particularly like the painting by functions challenge, which invites you to imitate computer graphic artists by representing your favourite image using mathematical shapes and functions.

But there's lots of other stuff too, from celtic knots to origami. There are activities for all age and ability ranges — why not have a look?