In our last online poll to find out what Plus readers would most like to know about the Universe you told us that you'd like to find out how long a day is. We took the question to the physicist Nicholas Mee and here is his answer — and it's not 24 hours! 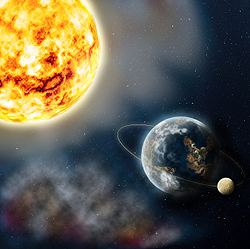 If you are looking for something to while away the holiday, then this issue has plenty of ideas for you! We explore the power of origami to solve ancient (and very modern) problems, find the maths in fashion, and marvel at the complexities of church bell ringing. But it's not all fun and games, as we investigate the controversies surrounding breast screening and the maths behind drug-induced hallucinations, find out how to predict the impact of natural catastrophes, and answer some deep questions about the Universe.

In our online poll to find out what Plus readers would most like to know about the Universe you told us that you'd like to find out if time travel is allowed. We took the question to Kip Thorne, Feynmann Professor of Theoretical Physics, Emeritus, at the California Institute of Technology, and here is his answer.

I know a little GR; but no Quantum Gravity and very little QM.
I interpret the article as saying that the consensus is: Quantum Gravity can not be fit into Godel's time-closed solution to GR. Is that correct? In that case the global topology would constrain the deeper theories. Put another way Quantum Mechanics can not be embedded/formulated on an arbitrary manifold.
These are questions; not statements.
Ray

I read references 2,3
3 is quite readable.
2 is tougher and I am not through.
The idea that some local properties can't be extended globally in some topologies is not as strange as it might seem at first glance; there are other examples.
I do have doubts about some of the reasoning; but that doesn't fault the reasoning just the presumptions.
I think its possible that the "energy conditions" are not the right analysis tool. Something along the lines of Entropy (Maxwell's daemon ) might be sharper in the mathematical sense.
Ray

Th relation to Casimir vacuums was fascinating. So is the solidarity of Hawking's argument.
Although the possibilities of time travel would lead to the age old grandfather paradox, and I am not sure as to what would be a right explanation. Maybe the Copenhagen interpretation of splitting states to maintain Quantum decoherence.
Cannot say anything conclusively.

Are you a committed non-smoker who loves rock climbing? Then, like most of us, your have an ambivalent attitude to risk. Some risks are so much fun they're worth taking, and others you definitely stay clear of. But what's the attitude of a risk professional like David Spiegelhalter, Cambridge Professor of Public Understanding of Risk (and regular contributor to Plus)? Find out in this short video posted on the Cambridge Ideas website.