Vicky Neale loves maths because it's a real challenge. Find out about two of her favourite mathematical experiences and why she thinks that maths is an adventure that requires some daring.

Carola-Bibiane Schönlieb has a fascinating job: she works on the mathematics behind image analysis. It finds application in all sorts of areas, from medical imaging, such as MRI scans, to forest ecology, which sees scientists trying to gain information about forests from pictures taken from the air.

In this brief interview Carola tells us why she likes doing maths, recalls some of her favourite mathematical moments, and explains why creativity is essential in mathematics.

You can read more about her work in What the eye can't see and Restoring profanity.

Mathematicians often say that being creative is hugely important in maths. But why? We asked mathematician Katie Steckles, who told us about her favourite mathematical moments and why imagination is everything.

Mathematical moments is a series of short interviews with mathematicians about their work and the role of creativity in maths. This is the first interview of the series — stay tuned for more! The video will also appear on our sister site Wild Maths, which encourages students to explore maths beyond the classroom and is designed to nurture mathematical creativity.

It’s March 14th, which in the US is written as 3/14 — and since 3.14 are the first three digits of that most famous of mathematical constants, 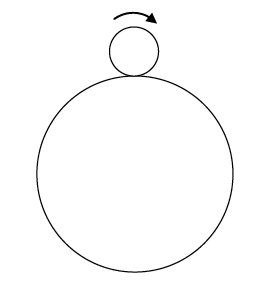 How many revolutions will the smaller circle make when rolling around the bigger one?

The circumference of a circle with radius

, so the circumference of a circle with radius

it seems the answer must be four revolutions. But that’s not true! The answer is actually 5! Can you figure out why?

We found out about this curious question from Yutaka Nishiyama, a mathematical friend in Japan. You can read about the answer in his article Circles rolling on circles. Happy puzzling!

The video above is one of our favourite talks from the last 12 months: it's by Sydney Padua, graphic artist, animator and creator of the wonderful Thrilling adventures of Lovelace and Babbage. Padua's talk, part of the Ada Lovelace Symposium in December 2015, explains how she used historical newspaper reports, letters and mathematical text books, as well as her extraordinary skill and imagination, to create the comic series featuring mathematicians Ada Lovelace and Charles Babbage in a parallel universe where they built a giant calculating machine to fight crime and have adventures. The comics originally appeared online but now are also available in a beautiful book which we are currently savouring. Stay tuned for a review soon. As well as writing the thrilling adventures, Padua also built the first virtual analytical engine (essentially the first ever computer, conceived by Charles Baggage with lots if input from Lovelace) in 3D animation software — a beautiful sight to behold, which elicited gasps of admiration from the mathematicians, computer scientists and historians in the audience.

The Symposium featured many fascinating talks: you can read some highlights in Analysing Ada and watch many of them on the Symposium website. Our favourites include Judith Grabiner's talk on the radical changes in the 19th century that produced new ideas of space, revolutionising art, making relativity possible and helping create modernism, and the talk by June Barrow-Green about the fascinating stories you can find in mathematical archives.

One of our other favourite lectures of the last year was by Nina Snaith on her work on the fascinating connection between the Riemann Hypothesis, an unsolved problem about the distribution of prime numbers, and chaotic quantum systems. (You can find out more in her LMS popular lecture.) We saw Snaith's talk at It all adds up, the London Mathematical Society's 2015 Women in Maths conference. (You can read more about the conference here.)

It all adds up was co-organised by one of our favourite mathematical friends, Vicky Neale, herself a great mathematical speaker who can enthral audiences of all ages and backgrounds. To see how, watch her introduce 7 things you need to know about prime numbers.

No comments yet
January 13, 2016
Has LIGO detected gravitational waves?

We've poked and prodded our contacts in the field but they don't want to comment at this stage – although it seems the rumours are solid and the scientists themselves are getting quite excited. We'll just have to be patient and wait for the LIGO team to analyse their data, which, to be fair, they only finished collecting yesterday. Stay tuned for an announcement over the coming months. And while you're waiting, you can read, watch and listen to some of our favourite physicists talking about black holes and gravitational waves.

How does gravity work? — We explore Newton's gravity, Einstein's gravity and the ripples in space-time called gravitational waves.

What is general relativity? — Physicist David Tong explains the theory and the equation that expresses it. Watch the video or read the article!

Catching waves with Kip Thorne — What happens when one black hole meets another? Kip Thorne shows us how to eavesdrop on these cosmic events by watching for telltale gravitational waves.