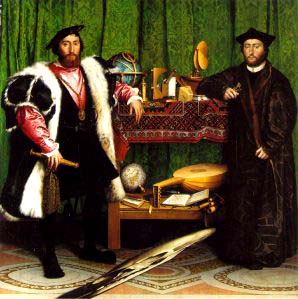 Fifty years ago, C.P. Snow claimed there were 'two cultures', sciences and the humanities, with an unbridgeable gulf between them.The idea sparked widespread controversy, which has continued ever since.

This debate will be revisited in the event Culture clash: The 'two cultures' 50 years on, part of the British Science Festival at the University of Surrey (Guildford). The speakers, Prof Robert Bud from the Science Museum, Dr Red Nield, editor of Geoscientist magazine, and Prof Raymond Tallis from the University of Manchester, will take a critical look at Snow's notorious idea and its enduring appeal. Have the two cultures moved any closer? And what do they imply for the larger questions he raised about education, economic development, and global inequality?

Where: University of Surrey
When: 4 pm Tuesday 8 September 2009
For more information and booking visite the British Science Festival website

And you can read more about C.P. Snow and mathematics and art on Plus.

In our third online poll to find out what Plus readers would most like to know about the Universe, you told us that you'd like to learn about the secrets of dark matter and dark energy. We took the first part of the question — what is dark matter? — to Martin Rees, Astronomer Royal and Professor of Cosmology and Astrophysics at the University of Cambridge. Here is his answer.

I read Lee Smolin's book ‘Las dudas de la física en el siglo XXI’, 2007, Ed. Crítica. Wonderful. I have seen that Lee Smolin are looking for a new big idea, the fundamental simply idea for the progress and unification of physics. Seems that Smolin got the conviction that both quantum mechanics and GR theorys don’t understand the deep nature of time (page 355). It is right for GR unless.

Here is what i say:
No more Lorentz’s Transformations. The new alternatives transformations (’relational transformations’) are deduced on ‘LA PARADOJA DE LOS GEMELOS DE LA TEORÍA DE LA RELATIVIDAD ESPECIAL DE EINSTEIN’, f.i., equations (22) and (23) with “C” and “D” given by (42) and (43) , pages (33) to (36). From them arises the ‘teoría relacional’, an alternative to special relativity.
The generalitation of this ‘teoría relacional’, the unique possible classic alternative to GR, appears on ‘EXTRACTO DE LA TEORÍA CONECTADA'. 3 are the fundamental equations. (84), (171) and (172), pages (146) and (182). This 3=24 equations are necessary in order to eliminate the Newton-Einstein’s absolute space. There are not absolutes accelerations (neither absolutes velocities, of course).

The DARK MATTER problem is solved in ‘Apéncice C’, page 205 (Exponential factor gets important at large distance from the center).

What about a “quantum teoría conectada”? I believe that you can say something important about it.


P.D.: Smolin IS completely certain when he tell that the great historic mistake comes from Descartes-Galileo ('Las dudas de la física en el s.XXI', pages 355-356). This great historic error is the Principle of Inertia (movement is a relational concept. It is completely false that the movement of ALL free bodies is a straight line. Some of them move, respect the SAME reference system, in a curved way. Spacetime metric defines a specific relationship betwen bodies and reference system.Pure evidence beyond the reason: at night, see the stars). Also, Principle of Inertia leads us to the inertial-non inertial dichotomy. Where is INVARIANCE of physical laws? (pages 45 on 'Paradoja' and 141, eq. (77), on 'Teoría Conectada').

Excellent educative article.I have more questions now before reading this article. Convey my thanks to the author.

I was talking in previous comment about a new Lorentz transformation.
Now you can see it in Relativity and Cosmology viXra.org, numbers: 34, 63 and 64.
Thanks

No Dark Matter, No Maybe


A. From "Experiment detects particles of dark matter, maybe"
http://www.sciencenews.org/view/generic/id/50960/title/Experiment_detects_particles_of_dark_matter%2C_maybe
Events in underground experiment too few for certainty, but match the signature of WIMPs.

- "...dark matter — the proposed invisible material believed to account for about 80 percent of the mass of the universe."

- "proof of dark matter, Hogan says, would be a huge transformation in how we do science; we would have a new form of matter to study."

- "WIMP fingerprints might be detected by a slew of experiments on the ground and in space including collisions of high-energy protons at the world’s most powerful atom smasher, the Large Hadron Collider near Geneva. Physicists using the LHC, which has now resumed operation after a year of repairs, plan to look for what would be missing: a deficit of energy in the collision debris could be evidence for dark matter particles."


B. Respectfully and tired of, I refrain from more quotes and just suggest searching "Dov Henis there is no dark matter nor dark energy"

Enough is enough. Humanity has been hallucinating about dark energy and matter for circa 100 years.

No comments yet
July 29, 2009
News from the world of maths: Sync: The Emerging Science of Spontaneous Order

It's not very often that something I read makes me want to jack in my lovely job at Plus and return to study and research. But that is just what happened when reading "Sync" by Steven Strogatz.

The book tells the story of how questions from diverse areas — Why do we sleep when we do? How do fireflies flash in unision? Why does our heart beat? How do you link generators in a power grid? — have developed into a new field of study. This new field, which Strogatz calls synchrony, examines how order can spontaneously break out in complex systems. The role of sync in such diverse areas of science is fascinating, but equally fascinating is his evocative description of the process of doing this research. Strogatz describes theoretical concepts and research problems almost as if they were physical entities that you could touch or smell.

No comments yet
July 29, 2009
News from the world of maths: Magic, origami, climate change and stupid equations: maths at the British Science Festival
Wednesday, July 29, 2009

The 2009 British Science Festival is celebrating creativity, innovation and evolution with a huge range of events over 5 days, from 5 - 10 September at the University of Surrey. And being all those things, Mathematics will be the star of the show, with a fantastic programme of events:

For more information about the festival visit www.britishsciencefestival.org or call 0207 019 4947. And you can read more about magic, finance, climate change and space travel on Plus. As discussed in our recent article Lambda marks the spot — the biggest problem in theoretical physics, dark energy and the cosmological constant remains a controversial area that lies at the very edges of our understanding of the Universe. One of the contributors to that article, Subir Sarkar from the University of Oxford, recently took part in the Big Questions debate series at Imperial College in London, debating the fate of the Universe with Andrew Jaffe from Imperial. Jaffe argued for the existence of dark energy, while Subir argued that it was an artifact of the oversimplified cosmological model used to interpret observations. At the end of the debate, the audience was asked to vote on whether they thought dark energy exists, and Subir told us: "Given that I was attacking the standard cosmological model, it was a pleasant surprise when the audience voted decisively in my favour!"

James Darcy reported on the Big Questions debate in his physicsworld blog, and in a followup post published a clarification from Sarkar on some of the details.

Plus readers, always seeking an informed debate, voted to ask the experts "What is dark energy and dark matter?" in our last IYA09 poll. We'll be recording the answer to that question soon, so stay tuned. And once everyone has had a chance to hear both sides of the argument we'll open the debate on the Plus blog by asking you to vote on whether you think dark energy exists. Will Sarkar win the argument again? We'll have to wait and see..

But where do the numbers come from? Patients with swine flu symptoms are no longer tested in the lab or traced, so the published figures are estimates, rather than absolute numbers.