November 30, 2010
Chaos in Numberland: the secret life of continued fractions

What are continued fractions? How can they tell us what is the most irrational number? What are they good for and what unexpected properties do they possess? Where are they in the Universe and just what does chaos have to do with it?

John Barrow, Plus columnist and director of the Millennium Mathematics Project, is also the Gresham Professor of Geometry and he recently gave a lecture at Gresham College explaining how this particular way of writing numbers can reveal extraordinary patterns and symmetries. You can watch a video of his lecture and read his original Plus article Chaos in Numberland: the secret life of continued fractions.

No comments yet
November 30, 2010
Science in Schools - Advent Calendar with a difference

To get you in the festive spirit Science in School is offering you an advent calendar with a difference — no little doors to open, no pictures of snowmen and no chocolate. Instead, each day for 24 days, they will send you an email with an inspiring teaching idea. Perhaps a science game to play at the end of term, maybe a fun experiment, some fascinating science facts, links to particularly good websites, or a beautiful picture to use in lessons.

The first email will be sent out on 1 December so sign up now at the Science in School website so as not to miss out.

No comments yet
November 26, 2010
Tell the world about maths with the FMSP-Rolls-Royce poster competition!

The Further Mathematics Support Programme (FMSP) and Rolls–Royce plc are pleased to invite entries for the third national poster competition for undergraduate or PGCE mathematics students.

Students are invited to submit a poster designed to convey the essence of a mathematical topic that has been covered by their university course to AS and A level students. You can submit a poster either as an individual, as a group, or as part as your course. The deadline is the 31st of March 2011 and the prize consists of £100 plus you'll have an A2 version of your poster printed and sent out to schools. Each printed poster will prominently feature the name(s) of its designer(s) together with recognition of their universities, Rolls-Royce plc and the FMSP. You can see winning designs of previous years here.

The best posters will be:

Posters may be designed in any readily available software. Ideally, the page layout should be set to 59.4cm × 42.0cm, using either landscape or portrait format. The university’s logo should appear in the top left corner and there should be a space 7cm high x 5cm wide in the top right corner for the FMSP logo. The bottom 2cm of the poster should be left blank. All images should be at least 300dpi.

The poster designs must be the students’ original work and you will be required to sign a declaration that this is the case. No image used should be protected by copyright. Entries may be submitted by students studying in any university department.

The FMSP reserves the right to edit the winning design before printing to ensure that it is technically correct and complete. Winners may be required to contribute actively to the editing process.

Entries should be submitted by e-mail to RichardBrowne@furthermaths.org.uk by 31 March 2011. The email must include the name(s) and full contact details of the designer(s). The poster design should be attached to the e-mail, in the form of an editable file.

No comments yet
November 26, 2010
Maths in a minute — geodesic domes

The dramatic curved surfaces of some of the iconic buildings created in the last decade, such as 30 St Mary's Axe (AKA the Gherkin) in London, are only logistically and economically possible thanks to mathematics. Curved panels of glass or other material are expensive to manufacture and to fit. Surprisingly, the curved surface of the Gherkin has been created almost entirely out of flat panels of glass — the only curved piece is the cap on the very top of the building. And simple geometry is all that is required to understand how.

One way of approximating a curved surface using flat panels is using the concept of geodesic domes and surfaces. A geodesic is just a line between two points that follows the shortest possible distance — on the earth the geodesic lines are great circles, such as the lines of longitude or the routes aircraft use for long distances. A geodesic dome is created from a lattice of geodesics that intersect to cover the curved surface with triangles. The mathematician Buckminster Fuller perfected the mathematical ideas behind geodesic domes and hoped that their properties — greater strength and space for minimum weight — might be the future of housing.

To try to build a sphere out of flat panels, such as a geodesic sphere, you first need to imagine an icosahedron (a polyhedron made up of 20 faces that are equilateral triangles) sitting just inside your sphere, so that the points of the icosahedron just touch the sphere's surface. An icosahedron, with its relatively large flat sides, isn't going to fool anyone into thinking it's curved. You need to use smaller flat panels and a lot more of them.

Divide each edge of the icosahedron in half, and join the points, dividing each of the icosahedron's faces into 4 smaller triangles. Projecting the vertices of these triangles onto the sphere (pushing them out a little til they two just touch the sphere's surface) now gives you a polyhedron with 80 triangular faces (which are no longer equilateral triangles) that gives a much more convincing approximation of the curved surface of the sphere. You can carry on in this way, dividing the edges in half and creating more triangular faces, until the surface made up of flat triangles is as close to a curved surface as you would like. Worried you missed Pi day? Never fear! Thanks to the kind people of Wolfram we now have a bevy of mathematical dates to celebrate — six in November alone! November 23, or 11/23 for people in the US, is Fibonacci day as 1,1,2,3 is the start of the Fibonacci sequence. And Twilight fans will be excited that recent months have not only included a Vampire day on 5th of October (since 10052010 = 5001 × 2010), but also that 25th of September was a Cullen day (as 25 and 9 are Cullen numbers)!

Today — 26th of November, or for Americans like the people at Wolfram, 11/26 — is a Eulerian day. The Eulerian number, A(n,k), is the number of ways you can rearrange the integers {1,...,n} so that your permutation is made up of exactly k increasing runs of numbers. And 11 and 26 are the 4th and 5th Eulerian numbers when k is 2 — reason enough to celebrate for Plus! We're off to the pub!

You find out all the mathematical dates we have to celebrate in the Wolfram Blog: Happy Vampire Day.

No comments yet
November 5, 2010
Maths in a minute: Simpson's paradox 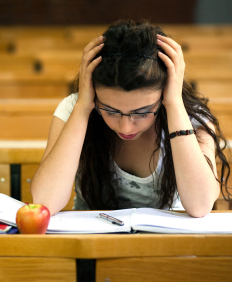