Kneeling in the mud by a country road on a cold drizzly day, I finally appreciated the wonder that is a lever. I was trying to change a flat tyre and even jumping on the end of the wheel wrench wouldn't budge the wheel nuts. But when the AA arrived they undid them with ease, thanks to a wheel wrench that was three times the size of mine. There you have it ... size really does matter!

A lever is a truly remarkable device that can literally give any of us the strength of ten men. You can counteract 10 men pushing down on one side of a see-saw by applying just 1/10th of their force, as long as you are 10 times further from the see-saw's centre as they are.

This is because the forces acting on a lever are proportional to the distances they are from the fulcrum. In this way a small amount of force moving a longer distance can move a large load over a smaller distance.

Archimedes was the first to mathematically describe how levers work and famously said: "Give me a place to stand, and I shall move the earth with a lever." And give me a long enough wheel wrench and I might just be able to change my next flat tyre for myself!

You can read more about levers from Wikipedia, and more about mechanics and about Archimedes on Plus

2 comments
May 26, 2011
Find out about the applications of origami — Maths-Art seminar on 9 June 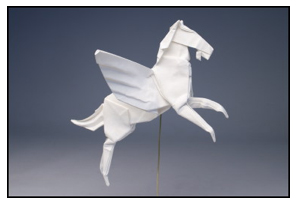 If you've ever marvelled at the elegance of a paper crane or just struggled to refold a map you will enjoy the next Maths-Art seminar from the London Knowledge Lab.

Applications of Origami will be a practical, hands-on workshop and presentation by Mark Bolitho and members of the British Origami Society. The presentation will cover recent developments in origami and present some of the projects Mark has worked on. It will also review how origami techniques have been adopted in applied design from architecture to product design.

The Maths-Art seminars are free to attend and everyone welcome. You don't need a reservation but an email to lkl.maths.art@gmail.com is appreciated for planning purposes. You can also watch past Maths-Art seminars on YouTube and read more about the maths of origami on Plus. 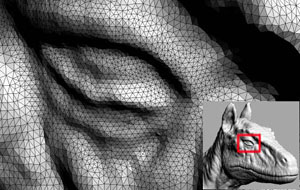 Ah the humble triangle. This simple shape is one of the first we ever learn. But perhaps you didn't realise just how important triangles are...

But triangles aren't just mathematically significant, they are also fundamental to the way we build in our environments, both physical and virtual. Triangles are special because they are exceptionally strong. Out of all the two-dimensional shapes we can make out of straight struts of metal, only a triangle is rigid. All other shapes can be deformed with a simple push if the shape is hinged at the corners (eg. a rectangle could be pushed over into a parallelogram). But not the trusty triangle, which explains its ubiquitous use in construction from pylons to bracing.

Triangles are also special because they are the simplest polygon — it is a common approach to a tricky geometrical problem, such as analysing a complex surface, to instead approximate it by a mesh of triangles. This approach is also used in the real world to achieve some of the exotic shapes we now see in modern architecture, such as the curved shape of 30 St Mary's Axe, aka the Gherkin, or the canopy over the courtyard in the British Museum.

This method of triangulation also is vital in building our virtual world. The fluid forms of the CGI characters we see in film and on TV are actually an incredibly fine mesh of triangles, in order that they can be stored and manipulated digitally.

Triangles — the simplest shape that makes our mathematical, physical and digital worlds go round.

You can read more about triangle strength and their role in our physical and virtual worlds on Plus. And you can find out all about their role in mathematics at Wolfram MathWorld. 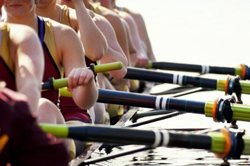 We came across the excellent Math Encounters Blog through their post Dimensional Analysis and Olympic Rowing, a response to the New Scientist article by Plus author, John Barrow.

Math Encounters is about those problems we might encounter any day where a little bit of maths can really help. Posts cover the maths of carpentry, drinking, management and much more. The maths can be quite surprising and is always clearly explained. And unlike many other popular science and mathematics blogs, it definitely doesn't shy away from the interesting details!

No comments yet
April 20, 2011
Vote for your favourite Olympic sport

Is there maths in beach volleyball? Or show jumping? Or in Taekwondo? If there is, then Plus is going to find it.

But to know where to start, we need your help: we'd like to know which of the Olympic sports you'd most like to see covered in Plus. So please vote below — you can choose up to three sports. We'll do our best to cover your favourite sports in the run-up to London 2012 and our coverage will also be shared by our Olympic project Maths & sport: Countdown to the games.

No comments yet
April 11, 2011
Maths in a minute: The fundamental group

Topologists famously think that a doughnut is the same as a coffee cup because one can be deformed into the other without tearing or cutting. In other words, topology doesn't care about exact measurements of quantities like lengths, angles and areas. Instead, it looks only at the overall shape of an object, considering two objects to be the same as long as you can morph one into the other without breaking it. But how do you work with such a slippery concept?

One useful tool is what's called the fundamental group of a shape. Take the sphere as an example. Pick a point A on the sphere and consider all the loops through that point - i.e. you look at all the paths you can trace out on the sphere which start and end at your point A. You consider two loops to be equivalent if you can morph one into the other without cutting either of them. You can combine two loops p and q to get a third one by simply going around p first and then going around q. Also, if you traverse a loop in the clockwise direction, then this movement has an opposite, or an inverse, which is traversing it in the counterclockwise direction.

These two properties, that two loops can be combined to get a third and that every loop has an inverse (together with a couple of other properties), mean that the set of loops (where you consider two loops as equivalent if the can be morphed into one another) form a neat and self-contained structure called a group. It turns out that as long as your object is path-connected (there's a path linking any two points on it) this structure is the same no matter which point A you used as the base for your loops.

Now on the sphere every loop can be transformed into every other loop. In particular, every loop can be contracted into the trivial loop, which goes nowhere and is just your base point A. The fundamental group in this case is also trivial, in other words it contains just one loop. This is true not only for the perfectly round sphere, but also for a deflated football, and for any other 2D surface that's topologically the same as the sphere.

But now think of the surface of a doughnut, also called a torus. In this case not all loops can be contracted to a point because they may wind around the hole of the torus and also around its body. A general loop may wind around the hole a total of m times and around the body a total of n times. It turns out that any two loops are equivalent if they wind around the hole the same number of times and also wind around the body the same number of times. The fundamental group of the torus is the same as a group structure you get from looking at ordered pairs of whole numbers (to be precise, it's same as the direct product ZxZ, where Z is the set of whole numbers). This is true not only for a perfectly round torus, but also for a really irregular and lumpy one. So the direct product of ZxZ, which is a well-understood structure, gives a good characterisation of tori, regardless of their exact geometry.

The concept of fundamental group is a powerful tool in topology, where you can't use precise measurements to describe an object. It's also connected to one of the trickiest problems of modern maths: the Poincaré conjecture. It seems obvious that any object with a trivial fundamental group is topologically the same as the sphere: a trivial fundamental group means that the object has no holes for the loops to wind around and if there are no holes, then the object can always be deformed into a perfect sphere. At the beginning of the twentieth century Henri Poincaré asked whether a similar statement was true for the 3D sphere (which is hard for us to visualise) and found the problem was a lot trickier. It took around 100 years to prove that the answer is yes.

Read more about the Poincaré conjecture, about topology in general and about groups on Plus.