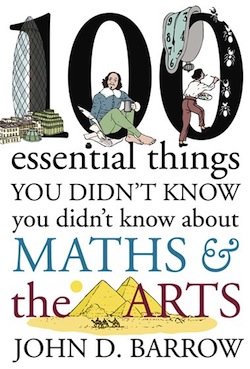 You don't need to register for the event, it's first come first served. Find out more here. You can also read an extract of the book on Plus.

No comments yet
November 5, 2014
Chemical bonding

Our image of the week is all about chemistry! 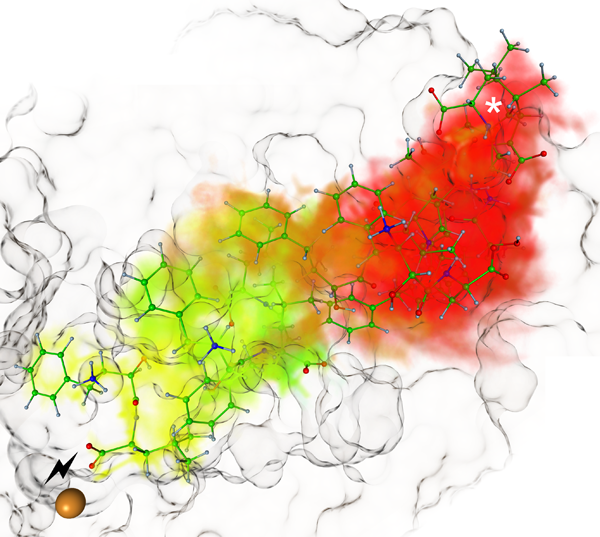 This image reveals the shape of enzymes and how they bind together. It is produced using mathematical methods. Created by Alexander Bujotzek, Peter Deuflhard, and MarcusWeber. © Zuse Institute Berlin, Germany.

No comments yet
November 3, 2014
Walking the tightrope

The tightrope walker Nik Wallenda's latest achievement is breath-taking. Without a safety net or harness Wallenda walked the gap between buildings on either side of the Chicago River before crossing between the two Marina City towers — blindfolded. His feat was televised, but with a ten second delay, in case he fell. Thankfully he didn't! You can see part of his walk in the movie on the right, but don't look if you're faint-hearted.

Like any tightrope walker, Wallenda carried a long pole to aid his balance. But why? What's the physics behind it? We rummaged in the Plus archive and found that a few years ago mathematician John D. Barrow had already come up with an answer. The key idea is something called the moment of inertia, which measures an object's resistance to being spun around an axis. The long pole increases the tightrope walker's moment of inertia by placing mass far away from the body's centre line (moment of inertia has units of mass times the square of distance).

To convince yourself that this really works, you don't need to do a blindfolded tightrope walk 150m above the ground. Simply compare how easy it is to balance a one metre ruler on your finger compared with a ten centimetre ruler.

You can read more about the moment of inertia, as applied to space crafts and boomerangs, in these Plus articles.

The chorus of people singing happy birthday to Maths Inspiration today could be deafening, particularly if the 100,000 teenagers who have been lucky enough to go along to these shows over the last 10 years join in!

Maths Inspiration, set up by Plus's good friend Rob Eastaway, is a fantastic project that runs interactive maths shows all over the UK. The shows are for 14-17 year olds and demonstrate how maths is useful beyond school. And they do more than that, they make maths cool! The shows are held in some of the most prestigious theatres in the country, including The Palace Theatre in London, The Crucible in Sheffield and The Bristol Hippodrome, and feature comedians, teachers, musicians, space scientists, stadium designers, medical professionals, and fitness instructors, who all also happen to be mathematicians. Each show features several talks on topics ranging from roller coasters to the maths used to convict criminals and is very interactive. Students are invited on stage to participate in demonstrations throughout the show.

And if you haven't had a chance to see one of their shows yet, you can still join the party. Their Autumn shows feature Rob Eastaway explaining what the competition between Coke and Pepsi can tell us about world peace, Hannah Fry examining how human connections can cause everything from the movement of crowds, to fashion, and can even help catch the odd burglar, and Ben Sparks will show why emotion, art and mathematics go hand in hand. You can book now at the Maths Inspiration website. And if you're not able to attend a show, you can still catch some of their shows on DVD.

From the Plus team and the 100,000 other lucky people to have seen your shows, Happy tenth birthday Maths Inspiration!

You can read more on Plus about Maths Inspiration in Maths inspires a roller coaster ride and many articles by Rob Eastawy as well as reviews of his great books.

No comments yet
October 22, 2014
Revealing a lost space: The British Museum courtyard

Our image of the week shows the courtyard of the British Museum in London with its beautiful glass and steel roof. 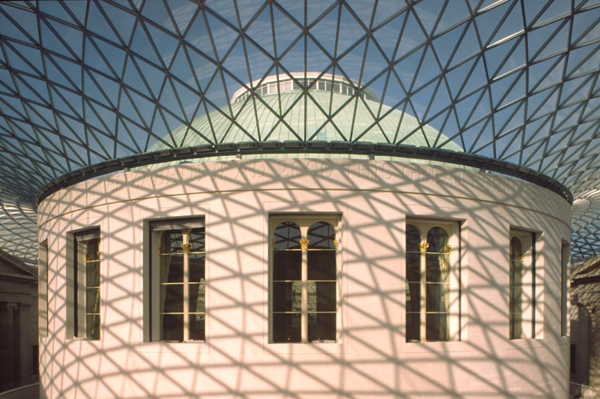 Officially the space is named the Queen Elizabeth II Great Court. Designed by Foster and Partners it transformed the Museum's inner courtyard into the largest covered public square in Europe. The courtyard was originally meant to be a garden, but in 1852–7 the Reading Room and a number of book stacks were built in it to house the library department of the Museum and the space was lost. Then, in 1997, the department moved to the new British Library building and there was an opportunity to re-open the space to the public. A competition was launched and won by Lord Foster, whose design is loosely based on the concept for the roof of the Reichstag in Berlin, Germany. The canopy of the roof was constructed out of 3,312 panes of glass, no two of which are the same.

Find out more about the maths behind Foster and Partners architecture here.