Can we predict the future?

A bit of history 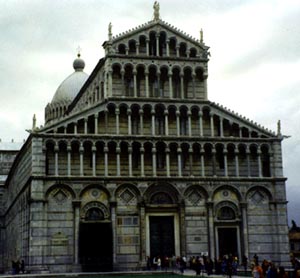 The cathedral at Pisa

In a sense we can say that modern science started because of a boring sermon. Around 1600, Galileo was attending mass at the cathedral in Pisa when he became bored with the sermon. Doing what any self-respecting scientist would do in the circumstances, Galileo watched the cathedral's candelabra (a form of pendulum) swing to and fro. Timing the swing with his pulse he discovered that it had a very predictable and regular motion: its swing always took the same time and two pendulums of the same length had the same period. Really this is remarkable, if you think of the number of things that might effect the swing of the pendulum including the motion of the air, irregularities in its the shape and differences in the strength of the push that you give it to start it off. Yet these really do seem to have very little effect on the period of the pendulum: the motion is repeatable, predictable and understandable, hence its effectiveness in telling the time in a grandfather clock.

Several years later, and in part motivated by Galileo's discoveries, Sir Isaac Newton described for the first time the fundamental laws of motion of the universe. Before Newton the world was seen as an unpredictable place in which events seemed to happen at more or less at random. After Newton, it suddenly became apparent that some at least of the phenomena of the world could not only be explained, but also their future motions predicted. Crucial to this was the understanding that predictions could be made by using mathematics. This achievement cannot be over-emphasised. Mathematics is an abstract creation of the human mind which appears to have little, if anything, to do with reality. People often complain "what is the possible use of mathematics?" Since Newton, this question can be swiftly answered: the whole physical universe works along mathematical lines. For example, the pendulum can be described by a "simple" mathematical equation which can be solved on a computer. 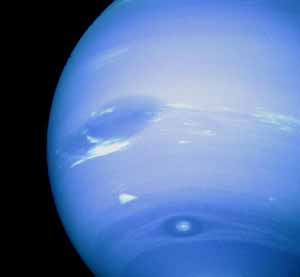 An early success in using Newton's laws to make predictions came with the discovery, using mathematics, of the planet Neptune. More triumphs of mathematical prediction came in the 19th and 20th centuries. James Clerk Maxwell predicted the existence of radio waves through purely mathematical reasoning. Just think of the effect of this discovery on the human race. Albert Einstein discovered the theory of relativity, which plugged some gaps in Newton's theories and allowed mathematicians to learn about the creation of the universe in the big bang and to discover such exotic creatures as black holes and wormholes.

All this made some scientists rather over-confident in their powers of prediction, indeed in the 19th century the great French mathematician Laplace said:

If we were to know with precision the positions and speeds of all the particles in the universe then we could predict the future with certainty.

Is nature really so predictable? 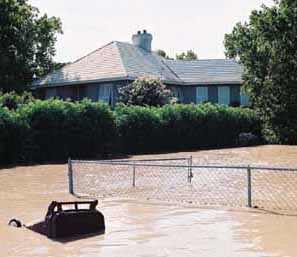 This state of affairs is all very well for planets, but does it really agree with the state of nature that we observe? In short, it does not seem to. Many natural phenomena seem to be very unpredictable, for example the weather (especially when camping with children) and the long-term effects of climate change. Closer to home, the idea of scientific predictability fits uncomfortably with human behaviour and the notion of free will.

So we are faced with the dilemma of either thinking that the laws of nature don't apply to things like the weather, or realising that Newton's concept of predictability (through mathematics) needs rethinking.

Two big scientific discoveries have indeed challenged the notion of predictability. The first is quantum theory which gives a fantastic explanation of behaviour on the atomic scale, based - almost paradoxically - on a fundamental uncertainty of the precise behaviour of sub-atomic particles. It is possible (though I make no great claims here) that this level of uncertainty is linked to consciousness and free will.

However, quantum uncertainty tends to disappear at larger scales, and to understand the erratic behaviour of the weather we need to use chaos theory. It is claimed by some (usually those who don't understand it well) that chaos theory helps us to understand all of the unpredictable things that we see all around us, like the stock market. Is it really possible that science has advanced this far? Well, to be honest, no, not really. However, chaos theory really does give us a way of understanding many complex and unpredictable natural phenomena. Such understanding has many important applications. It also seems to touch a deep chord in the human psyche. We like things to appear random; unpredictable and erratic behaviour is often much more fun than boring, predictable behaviour.

A physical example of chaos

To appreciate what chaos is all about we return to Galileo's pendulum and simply add another pendulum beneath it, making a double pendulum. To picture this, imagine the first pendulum as the top half of your leg; now add another pendulum jointed to the first in exactly the same way as your lower leg joints to your upper leg at your knee. It helps if the top pendulum is about twice the weight of the bottom one and the knee joint is really smooth. If you set this up and start it swinging, something very remarkable happens. For small swings the double pendulum behaves very regularly, but for larger swings its behaviour is completely irregular. The double pendulum captivates any audience with its unpredictability. It toys with them, asking "what will I do next?", and always deceiving.

This is the true essence of chaos - a simple mechanical system which we feel we should understand, yet which outsmarts us. The crazy thing about this is that we really DO understand the double pendulum. We can write down mathematical equations for it based on Newton's laws of motion, and these equations can be solved on a computer to say what the motion of the pendulum should be. However, the computer itself predicts that the pendulum should move in an essentially random and unpredictable fashion. Even though we can "compute" the motion of the pendulum, we still cannot "predict" what the pendulum should do even a relatively short time after we release it. Now, very small disturbances to the way we start the pendulum or the effect of the slightest air current, rapidly get amplified and make huge differences to the final motion. 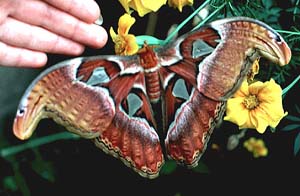 All chaotic systems share these two features of being fundamentally simple (in that they are described by straightforward mathematical equations) and yet being unpredictable and unrepeatable, with the smallest changes having enormous effects later on. This is often called the "Butterfly effect". Lorenz, one of the chaos pioneers in the 1960s, captured the essence of this concept by remarking that the flap of a butterfly's wings in Borneo could lead to a hurricane in Florida.

Chaos in the city 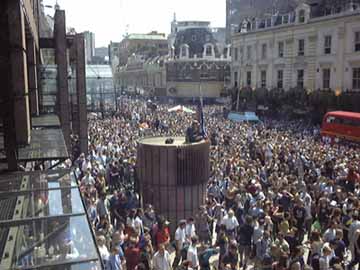 Where to put everyone?
Image copyright DHD Photo Gallery

Now, imagine that you are a town planner and you need to predict the population of your town ten years into the future (so that you can build enough houses and schools). If we know the population x this year we might think that there might be some rule f(x) so that next year's population is given by f(x). A very popular such rule is

where M is the maximum possible town population, and a is a measure of how many people are born and die in one year.

Rules like this occur everywhere in science - and many other aspects of life. For example, a relationship between the numbers of people suffering from a disease every year or the way that tomorrow's weather depends on what has happened today, possibly obey similar sorts of rules. Going back to our town, we can now ask how the population will change from one year to the next. To find this out, we apply the rule over and over again, so that if xn is the population in the year n then the population xn+1 in the year n+1 is given by xn+1=f(xn). If we knew a start population x1, then it is easy to use a computer to find the future population values x2,x3,...,x10. However, if you do this something remarkable happens: for small values of a the town population is very predictable, however, for larger values the populations get ever more complex, and (if we take M=1) then as a approaches 4, they are chaotic, with very small changes to x1 greatly affecting the value of x10. Our poor town planner is now in a fix, unable to predict the town's population ten years into the future.

What does this all mean?

Chaotic motion really does exist both in nature and in mathematics. Why should this concern us? 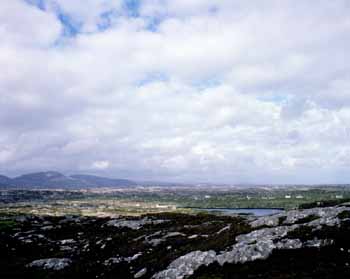 Firstly, as town planner and pendulum show, seemingly complicated behaviour may have a simple underlying explanation. This discovery tempts us to think that we may be able to understand other complicated things (such as the stock market) in terms of simple rules. Sadly, this is not always the case. Many things are complicated because they are governed by the interactions of many hard-to-control events, like clouds, people and (probably) the stock market. Chaos won't help too much here, although it has proved useful in understanding some irregular events like disease epidemics.

Secondly, chaos is important because it shows a limit to how well we can predict, and control, the physical world. This is quite worrying when you think how much of the modern world relies on our making predictions from scientific formulae. Every time I drive my car over a bridge I rely on predictable physical laws. Fortunately, not all physical systems are chaotic.

However, there are two chaotic systems which affect us greatly. The first is the weather. Although weather equations are pretty well understood and are solved by computers every day, it is impossible to take into account all the factors influencing the weather (remember the butterfly). No set of data is perfect, nor are computers perfect at solving the equations. The effects of these small errors build up remarkably quickly. After about ten days it is essentially impossible to forecast weather with any degree of accuracy.

Chaos is also key to understanding the solar system. Whilst the motion of the planets is very predictable, the motion of many of the asteroids is not. Although asteroids do obey Newton's laws, they may well have orbits which move erratically about space. Such an erratic asteroid is thought to have hit the Earth 65 million years ago and wiped out the dinosaurs. The consequences of a similar incident occurring today are unthinkable; the nature of chaotic motion means that such events are virtually impossible to predict until too late.

Chaos raises many interesting philosophical issues and can lead to many fruitful mathematical investigations. But is it of any use? Well, yes. The heart is thought to behave chaotically when it goes into fibrillation after a heart attack. Intense study is going on to see whether chaos theory can help predict this and to design pacemakers to restore a fibrillating heart to its normal regularity. Car brakes squealing occur in a chaotic pattern: in this case, randomness is less destructive than regular mechanical wearing. Some modern encryption systems use chaotic signals. Fractals (closely related to chaotic maps) are very important in computer graphics. Lasers, power systems, fluid motions, disease epidemics, car suspensions, capsizing ships and particle accelerators, all depend on chaos. However, to answer our first question, chaos cannot be used to predict the future. As far as I know nothing can do that!

This article first appeared in Sources, the Educational Bulletin of U3A, the University of the Third Age. It is reproduced here by kind permission.