In the movie "Contact" a mysterious alien race provides humankind with blueprints for an interstellar vehicle. The designs are beamed across billions of kilometres of space by a transmitter of unimaginable power and are received on Earth by a rag-tag group of astronomers searching for signs of alien life. The blueprints are preceded by a series of groups of a sound which, if you can imagine it, is not unlike a herd of cats dragging their claws down blackboards at the moment their fall from a high cliff is terminated by the ground. The series consists of 100 groups of increasing numbers of the sound:

The character in the film played by Jodie Foster quickly realises that the list is the first 100 prime numbers. Why, asks the inevitable military man, should aliens choose to send prime numbers? The answer is that the indivisibility of prime numbers by any number other than themselves and one is a universal truth. We know it, and so should any other creatures of comparable or greater intelligence. 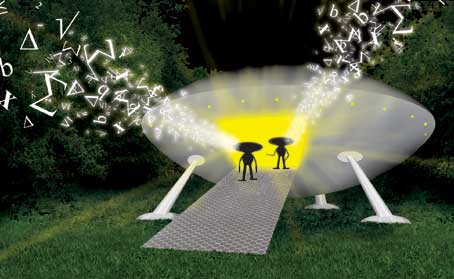 The great physicist and populariser of science, Carl Sagan, on whose book the film is based, next demonstrates how a shared universal mathematics and rules of logic can be extended to a common lexicon able to convey complex information. For example, the alien versions of the statements

furnish us with the signs for addition, equality, truth, and falsehood.

This is perhaps the best part of the story. It successfully introduces an important point: the supposed universality of mathematics. I say "supposed" because there are arguments both for and against this statement. Maths could be invented or it could be discovered. (It could be somewhere between the two: after all, we "discover" archaeological evidence and then "invent" a history around it.) The debate is ancient and scholarly, but we can at least hope to approach it by asking why maths helps us to understand the physical universe. To put it another way: Why does maths work?

Let's start at the very beginning 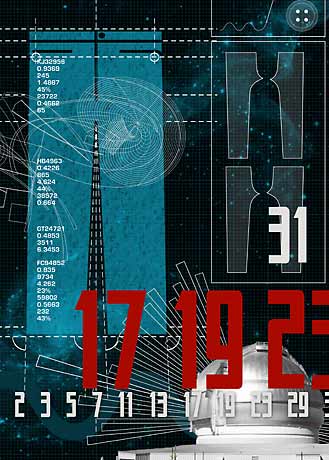 The trousers of mathematics

If you're going to tackle a question to which no-one knows the answer, the best approach is to think like you did when naps and nappies were a big part of your life. Back then, you didn't panic because you hadn't read the "right" books, you just extended your understanding of the world by experimenting. Later, this probably continued as you took things apart to see how things worked. Everything was an experiment - even putting on your trousers (what happens when I try to put both legs into one hole, or to put my arms in instead of my legs, or put my trousers on my head?) This is exactly what we shall do here to try to get a feel for why maths is so useful.

Mathematics in fact wears two types of trousers, and this is a really multi-layered analogy as we will shortly see. The basic distinction is like that between jeans and the very finest bespoke Italian wool trousers. Both types look great in the right setting, and they share common themes: two legs, pockets, front fasteners, stitching, and so on. They are in almost all important respects "the same". But they were designed for different reasons. One type arose from a need for rugged, outdoorsy trousers for rugged, outdoorsy people who spend a lot of time on horses and in saloons avoiding shoot-outs. The other type evolved, if that term can be used, for suave and sophisticated parties and gatherings, often with trays bearing large stacks of gold-foiled chocolates.

Trousers of type I...

In our analogy, maths treated as a tool is like the jeans. It does the job of telling you stuff about the universe and can often be applied to a wide number of different areas, much in the same way as jeans are increasingly seen many kilometres away from a horse. Where jeans come from and why they are so good at their job is not very important. Mathematical people who use maths as a tool are engineers, applied mathematicians and physicists, chemists, economists, social scientists and many more besides. They construct mathematical models of their bit of the universe which turn qualities into quantities. They then rummage in the mathematical toolbox for tools to tease new qualities from the quantities. The right tool for the right job is all that matters - the models approximate reality in order to give us new insights. If they simulated it exactly there would be too much information and we would learn little. Interestingly, a large number of these people like wearing jeans.

...and trousers of type II

On the other hand, some of the people for whom maths is central to their job see it as "The Truth" of the universe. To these people, who include pure mathematicians and theoretical physicists, the universe is mathematical: everything that happens in it is the consequence of a universal logic acting on universal mathematical rules. This is the "expensive trousers" view of nature, because it matters where the material for the trousers comes from and how and by whom it is crafted into pleasing leg-coverings. Intriguingly, people who ascribe to this view can often be found shopping in the more exclusive tailors. These people want to be able to write down brief and preferably elegant equations from which all the phenomena in the universe arise.

The trousers one is limited, as are all analogies. In particular, it is possible for mathematics to be both completely true in a literal sense and a highly effective tool used to describe the universe. Trousers, on the other hand, are rarely both jeans and very expensive hand-tailored Italian slacks. That's why we said "maths wears two types of trousers" not "maths is two types of trousers", but that doesn't remedy all the limitations. In addition, we note that some of the "maths as a tool" camp may well believe in a fundamentally mathematical universe and also never wear jeans, even when they are on horseback. Likewise, some of the "maths as truth" people will use maths as a tool in their work, and may go home to relax in jeans. 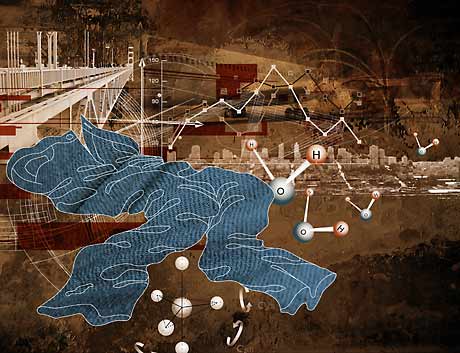 The unreasonable effectiveness of mathematics

But the key point remains: maths is incredibly effective at describing physical processes; why?

Let's give some thought to where new mathematical ideas come from. Of particular relevance here are mathematical ideas which later turn out to have some correspondence with reality. There are countless examples, but here are just two: supersymmetry and non-Euclidean geometry. It's likely that most people have never heard of these mathematical ideas, but almost everyone has heard of the areas of physics which depend so heavily on them: particle physics and relativity. These two areas are the oversize, rhinestone-covered, neon-coloured trousers of physics. Experiments are big and expensive; consequences profound and strange. A successful unification of the theories would be, we are told, the greatest achievement in human history. Both cases are built on mathematical ideas and techniques developed in advance and in ignorance of the physical theories for which they later turn out to be essential. Such examples seem to suggest that although mathematics looks like a human invention it is in fact universal - how else could we sit at a desk and write down abstract ideas so vital for apparently fundamental physical truths in the universe?

But crusty scholars in dusty rooms are not the only source of mathematical ideas. Sometimes, nature seems to be prompting us with new bits of mathematics. There are countless examples here, but a good one is the concept of a boundary layer. Boundary layers form in a moving fluid where it touches a solid body, and by "fluid" we mean everything from tenuous gases to boiling magma. Boundary layers are thin and the velocity of the fluid varies dramatically across them. Their influence on the dynamics of the body belies their relative size. For example, a common anecdote is that the laws of aerodynamics prove that bumble bees can't fly. In fact the opposite is true. Bumble bees superbly manipulate the boundary layers which form on the surfaces of their wings to generate "extra" lift. So while approximations to the laws do suggest that bumble bees' wings are too small, the full laws include boundary layer theory and do explain how they stay aloft.

The interesting point is where boundary layer theory comes from. Boundary layers were recorded in the earliest true hydrodynamic experiments in the nineteenth century and they eventually prompted a mathematical theory which has been wildly successful. But this theory was built on assumptions based on observations of the physical world - there is still no fundamental reason why these assumptions should be true. We believe they are because the theory built on them predicts real-world phenomena so accurately. You may say that relativity is also built on assumptions of the universe, but the difference here is that the physical observations actually suggested the mathematical methods required to extend the theory.

Observations implying mathematical techniques - surely this also points towards the universality of mathematics? Unfortunately not, because the problem boils down to a fundamental fact about science: evidence can't show that something is universally true, only that something is not universally true. Scientists posit "null hypotheses" - essentially that in any given situation they expect nothing untoward to happen. But null hypotheses can't be proven by evidence, they can only be shown false. 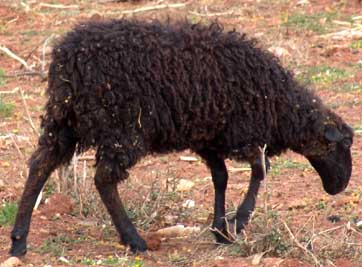 You may call it a black sheep; I call it a false hypothesis. Image DHD photo gallery

As an example, consider the null hypothesis: "All sheep are white". How would you prove this? Suppose that you visited every flock of sheep in Britain, would that prove it? No, because there are sheep in the rest of Europe too. So what about if you saw all of those sheep as well? Still not enough: you've the rest of the world still to go, and lots of lambs born in the countries you've already been to. But if you come across a black sheep champing the grass in the Shetlands then the hypothesis must be false.

But it is worse for our quest to understand the effectiveness of mathematics. We can posit the null hypothesis: "Maths is a universal truth". Then we can go out and look for contradictions; times or places when the laws of mathematics apparently change. But how would we recognise those locations? Would a star burning in a part of the universe in which multiplication was not commutative look any different through our telescopes? If it did, how would we distinguish that situation from a new type of star burning in an ordinary part of the universe? How would we distinguish between a change in the laws of mathematics and our own ignorance of this immense universe?

What if mathematics were universal but establishing so were impossible? Would we broadcast the message to our galactic cousins that mathematics is all talk and no trouser? 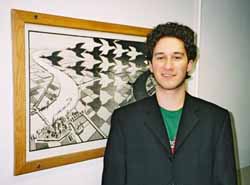 Phil Wilson is a JSPS Postdoctoral Fellow at the University of Tokyo, where he studies biological cell dynamics. He obtained his PhD in 2003 from University College London for research in fluid dynamics, and taught there briefly before moving to Japan. He likes to wear jeans.