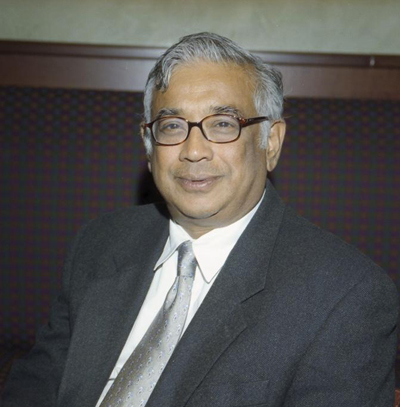 Some prizes you win for your achievements and others you win through sheer luck. The Abel prize belongs to the former category and it has just been won by the mathematician Srinivasa S. R. Varadhan for his work on the maths describing those rare chance events that produce lucky lottery winners but can also spell death and disaster. The Norwegian Academy of Science and Letters awarded the prize "for Varadhan's fundamental contributions to probability theory and in particular for creating a unified theory of large deviation".

If you are a wildly optimistic person or someone crippled by pessimism, then you have probably often been told by rational and reasonable people to consider the laws of probability. For every lottery winner there are millions of people who don't win anything at all and for every potential time you walk down the street and a brick falls on your head from out of nowhere there are millions of times you've walked down the street safely. Everything evens out in the end and therefore your hopes or fears are completely unjustified.

The rational and reasonable person will have been right. There are rigorous results in probability theory that prove this. The law of large numbers and the central limit theorem state, loosely speaking, that if you repeat the same experiment — playing the lottery or walking down the street — a large number of times, then the observed outcomes — the number of times you win or the number of times a brick falls on your head — reflect the true underlying probabilities, which in both cases are very small.

Theorems like the law of large numbers and the central limit theorem are powerful results that can cope with may real-life problems concerning chance and risk. Insurance companies use them to work out their premiums based on previous data, because a large data set is likely to reflect the true underlying probabilities. If they get their calculations right, they can be reasonably confident that any one huge pay-out is balanced out by a large number of customers dutifully paying their premiums and never costing them a penny. Engineers use the results to assess the average impact of lorries rolling over a bridge, or the robustness of a dam that is continually assaulted by waves. In all these cases it's the collective impact of many events, rather than an individual event, that is of interest.

But if you are a staunch optimist or pessimist, you will point out that one freak event is enough to make you rich or to kill you. No matter how unlikely, freak events do occur and once they have, you don't really care whether or not everything evens out in the end. And you will also be right. In many real-life situations rare events — like 1000 lorries rolling over a bridge in one day causing it to fail, or a freak wave causing a dam to burst — are simply too serious to be taken lightly. Striking the balance between feasibility and safety involves subtle and complex mathematics that is not covered by the classical theorems of probability theory. This is what the theory of large deviation, for which Varadhan is being honoured, is all about.

The theory of large deviation was first studied in the 1930s by the Swedish mathematician Harald Cramér, but it was Varadhan who generalised and unified it. He developed tools that are applicable wherever stochastic processes are involved and these range from economics and finance to biology and computer science. One of the difficulties in this area is that, while in classical probability theory individual events tend to drown in the vast ocean of a large sample, in large deviation theory they are extremely important. You need to know a lot more about an individual event than just the probability with which it occurs and its average impact. With his principle of large deviation Varadhan provided a general and concise guide to exactly what kind of information you need to apply the theory's tools; a guide that is applicable to all situations.

Even processes that are inherently deterministic, like large physical systems or problems in mathematical analysis, can often be analysed using statistical methods, and with his insight into probability theory and his tools from large deviation theory Varadhan has made significant contributions to both fields. According to the Abel prize committee, "the theory of large deviations has become a cornerstone of modern probability, both pure and applied."

As is often the case with mathematical pioneers, Varadhan ingenuity lies in being able to spot and exploit connections between seemingly different areas of maths, including convex analysis, nonlinear programming, functional analysis and partial differential equations. It's not just the wide range of applications of Varadhan's work that impressed the judges, but also its elegance: "Varadhan's work has great conceptual strength and ageless beauty. His ideas have been hugely influential and will continue to stimulate further research for a long time."