'The curious incident of the dog in the night-time' 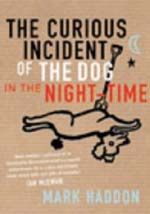 The curious incident of the dog in the night-time

Despite what the innumerate masses may wish, our daily lives are inextricably tied up with mathematics. On the most mundane level, we use basic arithmetic to do such things as tell the time, to count our change, to programme the video. But on a less obvious level we also need a reasonably good grasp of geometry in order to park the car in the garage or to pack the shopping bags carefully at the supermarket; we collect and interpret statistical data when the football results come in and we all seem to know how easily order turns to chaos.

In their own way, popular science books have been telling us this for years. But "popular" or not, they still have a limited readership compared with books about, say, a trainee wizard or a little creature with a ring. It is a simple truth, but fact is less popular than fiction. So when a novel comes along which mentions, and clearly explains, the Monty Hall Problem and Occam's razor as well as giving the full solution to an A level maths problem, it's worth stopping to take a closer look.

My name is Christopher John Francis Boone. I know all the countries of the world and their capital cities and every prime number up to 7,507.

In this way we are introduced to the main character of a rather strange and captivating novel, which is part detective story, part social drama and part encyclopaedia. Christopher is fifteen years old and suffers from Asperger's Syndrome, and as the novel is written entirely from his perspective, we are brought into an unusual world where rules, although apparently arbitrary, are of paramount importance. Red things are good, yellow and brown things are bad; different foods must not be mixed on a plate; people should never tell lies.

With these, and his many other curious intellectual tools, Christopher sets about trying to solve the mystery of who has murdered his neighbour's dog. Along the way, he introduces the reader to his family, his teacher, his neighbours, his pet rat and many of the interesting and unusual facts and figures he keeps stored away in his mind.

These aren't all mathematical, as Christopher has something of a scattergun approach to the acquisition of knowledge, but it is evident from his actions and from what he tells us that what is of paramount importance to him is logic. There is no intuition, no guesswork, no hunches, in his detection, or indeed his life as a whole, only rational reasoning.

In truth, there is nothing mathematically challenging in the book. There are a few interesting problems, clearly explained and discussed, and the A Level question which is answered in a brief appendix, but the strength of the book lies in its positive attitude towards a subject most commonly either shied away from or openly dismissed as "the subject I always hated at school".

Unfortunately, given the protagonist's affliction, the book may well end up simply reinforcing the stereotype of the mathematically gifted social inadequate, but I fear that until Harry or Hermione discover the joys of complex analysis, maths in fiction will remain, as here, a rare delicacy, not a staple.

Andrew Stickland is a freelance writer and copyeditor. He has written articles for various publications on subjects as diverse as travel and war-gaming, and regularly reviews some of the most accessible mathematical books and films, as well as providing the occasional photo for Plus.