Good things come to those who wait — according to a marketing slogan for Heinz ketchup from the 1980s. But why is the ketchup so difficult to get out of the bottle? The reason is that ketchup is in two minds: whether to pour like a liquid or stay put like a solid. It is one example of soft matter, a huge class of materials which behave in complex ways. 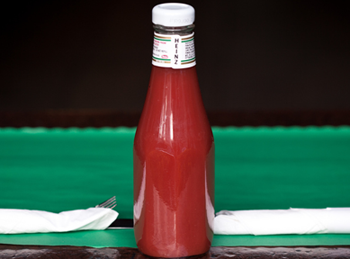 We interact with soft matter every day: toothpaste, chocolate, shampoo and mayonnaise are all examples, which can behave either as liquids or solids depending on the circumstances. Soft matter can also be found in laptop screens, advanced batteries, and in the processing of functional ceramics and plastic LEDs. Cambridge researchers have developed new mathematical models to describe why these materials behave the way they do, which could help improve them for both domestic and high-tech applications.

Soft matter is the focus of the inaugural lecture by Michael Cates, who was elected as the University of Cambridge's 19th Lucasian Professor of Mathematics earlier this year, thus following in the footsteps of Isaac Newton and Stephen Hawking. Cates' lecture, which will be held today, will cover how mathematical models can explain how soft materials can suddenly convert from liquid-like to solid-like behaviour, through a process resembling an internal traffic jam.

Cates' research aims to understand better why these materials behave as they do, allowing improved control for a range of future applications, including the design of entirely new materials with tailored properties. In his lecture, Cates will discuss the "jamming" behaviour of colloids and dense suspensions. Both are types of soft matter with an internal structure something like tiny ping-pong balls dispersed in a liquid. Recently, researchers have created "active" colloids in which the ping-pong balls are self-propelled, like tiny rockets. When their propulsion is switched on, these particles form tight clusters, despite the fact that there are no attractive forces between them.

"The question in this case is what causes the clustering? More generally, how does the internal structure of various types of soft matter affect the way they behave?" said Cates. After considering other explanations — including the idea that the clusters arise by a process resembling the flocking of birds — Cates concluded that each cluster is effectively a sort of traffic jam.

As every driver knows, a smooth distribution of moving cars becomes unstable at high density, leading to the formation of traffic jams. These can be triggered by even a single driver lightly tapping the brakes. The new mathematical model explains the spontaneous clumping of active colloids in very similar terms.

"Having now understood what's going on in these active systems, we hope to design better versions that can be used to create a wide range of new materials," Cates said.

Cates and his colleagues have also looked at very dense suspensions, such as paints, molten chocolate or wet sand. Previous mathematical models have assumed that the particles in a dense suspension are hard and smooth, like ball bearings. "The approximation of hard, smooth particles — though it has served us well for 25 years — does not predict the observed behaviour in these cases," said Cates. "So we needed to figure out what physics was missing. And we've found the answer: a better description of friction between the particles."

"In many dense suspensions, the aim is to maximise the amount of solids they contain without losing the ability to flow," said Cates. "In paints, for example, this reduces both drying time and solvent vapour emissions. Now that we know how much friction matters, we can think of new ways to improve flow by reducing friction, so that we can pack more particles in. Allowing the particles to glide past each other by reducing friction is like solving the age-old problem of getting the ketchup out of the glass bottle."

Cates' lecture will take place at 5pm on Wednesday 4 November 2015 at the home of Plus: the Department of Applied Mathematics and Theoretical Physics at the University of Cambridge. The main lecture theatre will be full, but members of the public are welcome to watch the lecture in the video overflow room, though the talk will be of a more technical nature.

You can read more about maths and ketchup in Meet the gyroid.

This article was adapted from a University of Cambridge news release. It's licensed under a Creative Commons Attribution 4.0 International License.