When I was at school I was very bad at physics. This was partly because I didn't believe the teacher, or the books, which asserted that much of the world could be described using comparatively short and simple equations. How could that be, if the world we observe is so wonderfully complex? So I concluded that the teachers and books were probably wrong. What I didn't realise was that there's no contradiction here — a world following simple rules can still be incredibly complex. The laws of nature may be simple, but their outcomes can be as wild as you like. 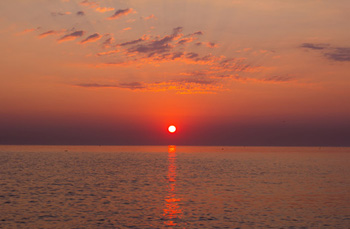 Studying repeating events in nature is the beginning of science.

In some way, my attitude to the world around me was a bit like that of early humans. "If you look back to the earliest human histories you find people seem to be more impressed by the irregularities of nature — earthquakes, disasters, and so forth — and they're the things that find their way into their historical records," explains John D. Barrow, a mathematician and cosmologist at the University of Cambridge. "Eventually people realised that if you studied the regularities of nature — the fact that the seasons came round on a regular basis, and the tides had a certain pattern — then you could exploit this for your benefit. So began a human preoccupation with the regularities of nature, and also a feeling for the idea of a cause and an effect: if you did something, it had a consequence."

Spotting those regularities is what we call science. Biologists find similarities between animals and group them together to form species or sub-species. Astronomers observe the regular movements of heavenly objects in the sky, and deduce that planets move in ellipses around stars. If a regularity appears truly fundamental, we call it a law of nature.

Perhaps the most striking examples of laws of nature are Isaac Newton's laws of motion and gravitation, which I so despised at school. They qualify as laws, rather than just minor rules or by laws, because they have an air of universality. The law of gravitation applies to apples falling from trees just as it does to planets moving around stars. The laws of motion are similarly general. Such laws also have explanatory and predictive power: they explain why we are stuck to the Earth, and allow us to calculate how long it would take us to hit it if we jumped off a tall building.

between two massive object is

First law: An object at rest stays at rest, and an object in motion stays in motion with the same velocity, unless it is acted upon by an unbalanced force.

is the force acting on an object,

is the object's mass, and

Third law: For every action there is an equal and opposite reaction.

We generally prefer laws that can be expressed simply and elegantly. For some reason, mathematics seems to be the best language for doing this. Newton's laws can be written using a few equations that are easily explained. Even Einstein's theory of gravity (which supersedes Newton's theory of gravity) hinges on a comparatively simple equation, and so do other fundamental descriptions of nature, such as Schrödinger's wave equation, or Maxwell's equations. Why maths should be the best language for the laws of nature is a bit of a mystery. But it's mathematical elegance many physicists strive for when trying to formulate the laws of nature.

But, then, what about all the chaos and complexity in the world? If we only pick out those simple rules and regularities, aren't we missing something? Not necessarily: the mess comes from the outcomes of the laws of nature, which can be a lot more complex than the laws themselves. Taking Newton's laws you can quite easily calculate the shape of a single planet's orbit around the Sun, and it's pleasingly regular: it's an ellipse. Introduce a third body into the mix, however, and things get messy. While the rules of the interactions are simple, the result, the paths the bodies take under each other's influence, are generally very complex. In fact, there isn't a general mathematical formula that gives you the exact position of each body at every point in time. The only reason we can make such a calculation for the planets in our solar system is that the planets are so small compared to the Sun that the gravitational pull they exert on each other is negligible. To work out the path of a particular planet, you only need to take into account the pull coming from the Sun.

So it seems that the world we live in is simple and complex at the same time. Simple at the level of the laws, but complex at the level of their outcomes. Which means that even scientists experience it differently. "If you're the sort of person that spends their working day trying to understand the laws of nature, and join them together, you will tend to think that the Universe is simple, because you look at it at the level of the laws," says Barrow. "But if you're a biologist, an economist, or a psychologist, you study the complicated world of the outcomes, and actually you never talk about laws of nature. No biologist would ever talk about laws of physics or laws of nature. They're just trying to find little bylaws and patterns within parts of this complicated world of the happenings. So for them the world is certainly not simple."

Thus, my early distrust in physics was unfounded. The complexity of the world doesn't preclude simple laws. In fact, the assumptions that there such things as laws of nature has got us pretty far. To find out more see Stuff happens: Laws versus outcomes.

Marianne Freiberger is Editor of Plus. She interviewed John D. Barrow in Cambridge in December 2015.