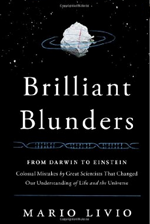 Brilliant blunders: From Darwin to Einstein

It's always good to see other people make mistakes, so a book about serious errors committed by some of history's greatest scientists is bound to be a good read. But Mario Livio's new book isn't just about reassuring ordinary mortals like me and it's not at all about poking fun at less ordinary ones. It's a thoughtful look at science as a human endeavour, the often haphazard path of its progress and the limitations of the human mind.

Who are the famous blunderers and what did they get wrong? I don't want to give too much away as that would be spoiling it. Livio's narrative is dynamic like fiction, the plot thickening as decidedly human characters interact, their blunders sticking out all along or suddenly whacking you over the head as the story unfolds. All I want to give you here is the protagonists' names — Einstein, Darwin, Lord Kelvin, the astronomer Fred Hoyle and the chemist Linus Pauling — and two examples.

The first example is Darwin's intriguing failure to recognise that his theory of evolution clashed violently with his theory of heredity. Darwin subscribed to the then common view that heredity is a matter of blending. Put simply, if you have five fingers on each hand and I have seven, then our offspring will have six. If this were true, then Darwin's theory of natural selection simply wouldn't work: a small change in a single individual, like having seven fingers, would be averaged out over the generations. No chance for sporadic variations to survive long-term and, if beneficial, become dominant, eventually giving rise to new species perfectly adapted to their environment. The fact that Darwin did not spot this conflict straight away, especially since it can be shown using a basic mathematical argument, is truly surprising.

My second example continues this theme, fast-forwarding to the discovery of the structure of DNA. It was Linus Pauling who had first, correctly and to huge acclaim gleamed a helical structure in X-ray photographs of proteins. When it came to DNA, however, he was disastrously wrong. DNA is an acid, yet the triple helix he postulated could not possibly represent an acid, due to the nature of its chemical bonds. It was a fact he could have easily have ascertained by reading his own textbooks. As James Watson told Livio, "You could not have written a fictional novel in which Linus would have made an error like this. The minute I saw the structure, I thought, 'This is wacko.'" Watson is, of course, one of the discoverers of the true structure of DNA, the now famous double helix. The other one was Francis Crick.

Why did these brilliant people make these glaring errors? With occasional excursions into psychology Livio comes up with some interesting suggestions, ranging from an addiction to being right (in Kelvin's case) and an addiction to disagreeing with others (in Hoyle's case) to a "misguided sense of what constitutes aesthetic simplicity" (in Einstein's case). In Darwin's case, a failure to grasp basic maths seems to have played a considerable role, a fact I (speaking as a mathematician) found strangely endearing.

The personal quirks of the protagonists, and their at times acerbic exchanges, drive along the narrative and they must have been a lot of fun to research. Crick and Watson stand out particularly, the former with "the looks of a fading racing tout", the latter with "a grin, more sly than sheepish, saying little, nothing of consequence." On another page we see photographic evidence, made on Livio's own request, that Darwin never read a crucial text by Gregor Mendel that would have precluded his error: in Darwin's copy of Mendel's book the relevant pages remain uncut.

As far as the science is concerned, the book covers a wide range, from the evolution of life and the evolution of the Earth to some demanding concepts in cosmology. But this needn't frighten you. Livio's usual knack at making sophisticated concepts accessible has been brought to bear on his book. No previous knowledge is required: everything, from Darwin's theory of natural selection to the periodic table, the make-up of atoms and the steady-state theory of the Universe is clearly explained. For this alone the book is worth reading, giving you a quick education in, or reminder of, some landmark scientific ideas and discoveries. Mathematics makes pleasing appearances throughout the book as the language that needs to be understood by anyone hoping to make scientific progress, but again, there is no reason to worry. The maths is there in the background and there are no hard equations or concepts to struggle with.

Brilliant blunders is a book about how people make science. What comes through clearly, as is one of the author's stated intentions, is that errors are part and parcel of the process and that science progresses, not always despite them, but also through them. If you want the whole story you can't erase its protagonists' humanity from the picture. With its illustrious characters, interesting ideas and those blunders to marvel at, the book makes a fascinating read.

Marianne Freiberger is the editor of Plus.

Thanks very much for your review of 'Brilliant Blunders.' It's now on my list.

In case you missed it, which I somehow doubt, Livio's 'Golden Ratio' is also highly enjoyable.

Thanks, too, for your essay on "Hidden Dimensions," which I've just now read in 'Best Writing on Mathematics' for 2011. You brought several related topics to a brilliant focus in this essay, viz., important work by Ricci, Chern, Kahler, Calabi and Yau. As it happens, I've been trying to chase down these connections for some time and you have aided my efforts in no small measure. I am truly indebted to you.

Here's the thing: Apropos arguments by Riemann, Minkowski and Weyl, among others, I have been arguing that it makes good sense to consider colors as a complex, projective vector manifold which fibers over visual spacetime. I guess the implications are fairly obvious, and so I won't belabor them, but you can easily see why your essay has been so helpful to me.