One in 6 men in the UK will be diagnosed with prostate cancer at some point in their lives: 47,000 get this news every year. A new online tool developed with the help of statisticians helps these men decide on their treatment options.

Predict: Prostate Cancer is an online tool to help patients decide on their treatment options.

More than half of men discover their prostate cancer at an early stage, before it has spread, and for them the choice is between jumping in to a big therapy such as surgery or radiotherapy versus waiting and monitoring the cancer to see if it grows. It's a difficult choice because the therapies have a high chance of side effects (including incontinence and erectile dysfunction) whilst many prostate cancers are slow growing and unlikely to cause a person's death if left alone. The trouble, of course, is knowing whether your cancer is one of the slow-growing ones.

A team at the University of Cambridge and Addenbrooke's Hospital developed an algorithm that uses a database of outcomes for patients in the past along with the data from trials of surgery or radiotherapy to help determine more accurately what an individual's prognosis is and what the benefits and harms of trying treatment might be for them.

Once they had produced the algorithm, though, the question was how to communicate the results both to healthcare professionals and the patients.

The psychology of numbers

Increasingly, patients are (quite rightly) being involved in decision-making about their treatment options. In many cases, there is no simple "right answer" for what treatment is best – it's an individual decision depending on personal circumstances, and how much the potential harms and potential benefits mean to a person. In order to take part in this shared decision-making, patients need to have the potential harms and benefits of different options put to them in a balanced and clear way.

This is what the Winton Centre for Risk and Evidence Communication in the Department of Pure Maths and Mathematical Statistics at Cambridge work on.

The psychology of how we understand numbers is sometimes quite surprising and means that the way that we communicate them can have a huge impact on how they are perceived.

For example, when asked which was the bigger risk — 1 in 10, 1 in 100 or 1 in 1000 — a quarter of people got the answer wrong. In fact "1 in x" statements like that are very difficult for people to compare – they are counter-intuitive: the bigger number represents the smaller risk. Instead it's much clearer to keep the denominator the same (eg 10 in 100 versus 1 in 100).

We also tend to view a number differently whether it is presented as a frequency (x out of 100) or a percentage. The statement "20 out of 100" brings to mind the 20 times when an event might happen, and makes it sound much more likely than the more abstract statement that there's a "20% chance" of it happening.

Graphics can help people visualise and compare numbers, but again they each have a different effect on whether they make a number look large or small. To give people an overall balanced view, then, presenting numbers in a range of different ways – evening out the bias associated with any one method – can help.

Putting users at the centre

When designing a way to communicate statistics, the Winton Centre team adopt a strategy called user-centred design, long used in industry to help design products that really work for people, but not often associated with academic outputs.

In order to develop an online tool to present what could be very difficult and upsetting survival statistics to recently-diagnosed patients, the team work closely with patients, healthcare professionals and the public, holding focus-groups, interviews and then working on a series of increasingly more realistic designs for the site as well as doing large-scale online testing to see what people understand from different forms of visualisation. 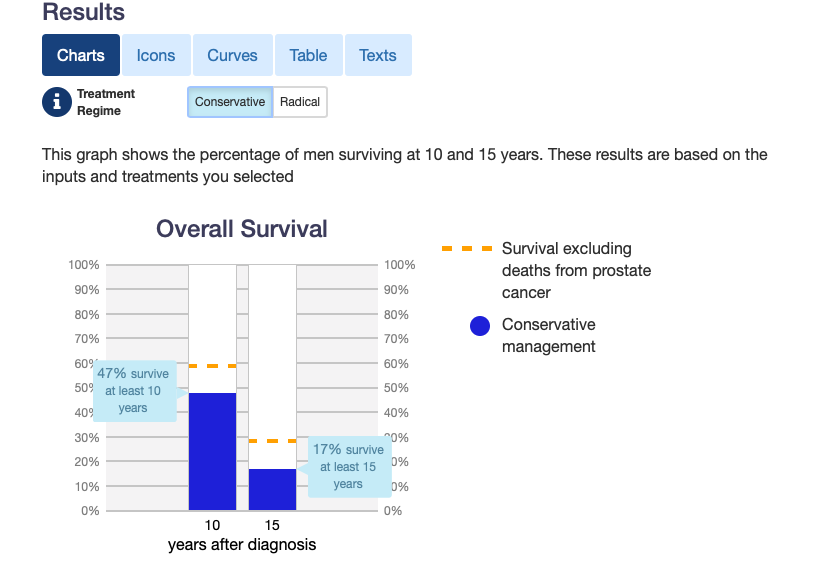 An example of a visualisation on Predict: Prostate cancer.

The Winton Centre is working on a number of such sites, for different health conditions, and were delighted to take on the task of designing the site to present the prostate cancer statistics. They were particularly pleased to be able to work on a way of representing the potential harms of the different therapy options – something that they haven't yet been able to do for their other, similar, site for breast cancer because the harms of treatments are often very poorly recorded and reported.

Predict: Prostate Cancer launched in March 2019 and is already being used thousands of times a month all over the world. It offers five different ways of showing the data: as text, a table, a survival curve, bar charts and icon arrays. The website has been enthusiastically received both by doctors and patients – one patient group describing it as "game changing".

The Winton Centre team are monitoring usage of the site, including how people use each of the visualisations within it, and continuing to carry out tests to see what people understand from each. They have also just made the site non-wifi-dependent (it will work on a device even when the wifi goes down) an issue that clinicians raised, as hospital wifi can be very patchy.

The Centre will be continuing to refine the site over the coming months. They are starting to prepare it for translation into other languages so that it can be used more easily to help patients across the globe. In addition they are working on a sister tool for men with metastatic prostate cancer who have similarly difficult decisions to make about their treatment choices.

Hopefully these web tools will allow all the data that has been painstakingly collected on cancer outcomes and clinical trials over many decades inform the decisions of patients all over the world. It will let them take part in the process of deciding what approach to their cancer is right for them — this is part of the revolution in our approach to healthcare that is now underway.