On the 21st of November 2005 the most famous equation in the world, 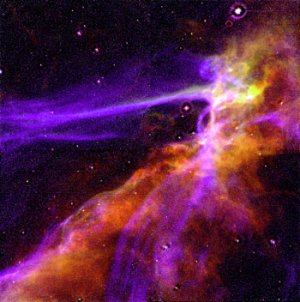 A remnant of the Cygnus Loop supernova. Image courtesy of NASA.

And just in time for this happy event, another one of Einstein's theories seems to have come into its own — even though he himself called it the "biggest blunder" of his life. An international team of researchers from the Supernova Legacy Survey (SNLS) has found evidence that with his cosmological constant, Einstein may have been on the right track all along.

Einstein invented the cosmological constant because he was unhappy with the equations describing his general theory of relativity. According to these equations, there could be no static universe: the force of gravity would cause it to contract. Einstein, however, firmly believed in a stable universe and started searching for a way to bring his equations into line. He realised that if he assumed that the vacuum of space has a fixed energy, and if he added a constant proportional to this energy to his equations, then the force of gravity would be counteracted.

Alas, it was soon realised that this solution would not do. Even though the cosmological constant allows for a stable universe in theory, in practice this could never be achieved. A static universe would be in an unstable equilibrium: the slightest nudge towards expansion or contraction would cause it to expand or contract forever. And because of the uneven way in which matter is distributed in the universe, these nudges occur all the time. Even worse, from Einstein's point of view, was the fact that Edwin Hubble's observations suggested that the universe is not static at all, but that it expands. Demoralised by this failure to predict the true nature of things, Einstein gave up on this particular part of his theory and committed his cosmological constant to the theoretical dustbin. 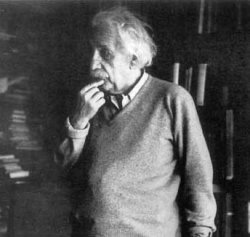 During the following decades, cosmologists came up with various theories explaining an expanding universe, the most famous and prevailing one being the Big Bang model. But in 1998 it was established that the expansion of the universe accelerates at a rate that was not accounted for by any of the existing theories. Scientists concluded that there must be another mysterious cause at work, and they called it dark energy. To this day, no-one knows exactly what dark energy is and how it works. But along with some other theories, Einstein's discarded idea is back in the race as a possible explanation. The existence of a cosmological constant would indeed lead to an accelerating expansion.

To put the various theories to the test, SNLS researchers are using some of the world's largest telescopes to observe 700 supernovae, or exploding stars. By observing the brightness of a supernova, they can work out how far away it is from Earth and how long ago the explosion took place. Moreover, as the light from a supernova travels through space, it expands along with the rest of the universe and its wavelength gets stretched. The amount of stretching is indicated by how far into the red end of the spectrum the wave has shifted. From the ages and red shifts of different supernovae cosmologists can deduce how much the speed of expansion has changed over time. 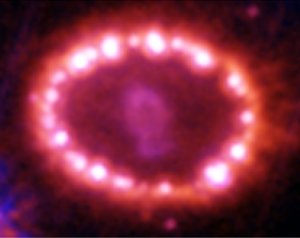 An image of a supernova taken by the Hubble space telescope. Image courtesy of NASA.

Two weeks ago the team released preliminary results. Observations from 70 supernovae suggest that the repelling force of dark energy has changed remarkably little over time. This places the cosmological constant ahead of its rival theories: it is the only one consistent with this lack of change. "The significance is huge," said Professor Ray Carlberg of the University of Toronto. "Our observation is at odds with a number of theoretical ideas about the nature of dark energy that predict that it should change as the universe expands and, as far as we can see, it doesn't."

The SNLS is far from complete since only 70 out of 700 planned observations have been made. According to SNLS member Dr Isobel Hook of the University of Oxford, "the best is still to come. The first year results already represent the largest homogeneous set of distant supernovae, but over the full five years of the survey we will improve our precision more and more. Our goal is a measurement of the nature of dark energy that will be a true legacy for years to come."

If Einstein's theory is vindicated by another 5 years of observations, we will have a reason to celebrate Einstein again in 2010.