'Can you solve my problems?' 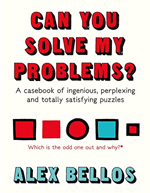 Can you solve my problems?: A casebook of ingenious, perplexing and totally satisfying puzzles

In Can you solve my problems? Alex Bellos offers yet another light-hearted exploration into the surprising world of mathematics. Following the acclaimed Alex's adventures in numberland and Alex through the looking-glass, Bellos uses a curated set of 125 thought puzzles to underscore the approachability of mathematics, without hiding any of its complexity. The puzzles are organised into five broad conceptual categories, and interspersed with historical commentary. Throughout, Bellos is intrigued more by the process of puzzle creation than by their solutions (though fear not, the book concludes with an extensive answers section). By weaving together the minds, cultures, and concepts that produced centuries of playful wonder, Bellos successfully brings an obscure corner of mathematics to life.

One of the key merits of puzzles, according to Bellos, is that they call upon pure mathematical reasoning, rather than on previous training. Puzzles require virtually no prior knowledge, and yet can confound even the most brilliant minds. This irony makes puzzles inherently humorous, a quality that can be amplified by how a problem is posed. These traits – accessibility and humour – are why puzzles are so entertaining, and apparently what led Bellos to author this book. They characterise the entire book's tone, which is readable and playful throughout, while never shying away from a fiendishly difficult problem.

Refreshingly, Bellos focuses not just on puzzles, but on their writers and their contexts. The first chapter opens in Charlemagne's court, where the scholar Alcuin offered the king "some arithmetical curiosities" to "amuse" him. Many of the puzzles found in that document remain popular today. By consistently focusing his narrative on puzzle writers, Bellos reminds us that making good puzzles is far trickier than solving them.

Bellos also shows how a puzzle can take on a life of its own, providing a window into the cultures that produced it and passed it down. He describes how the wolf, goat, and cabbage in the famous stream-crossing problem were replaced in different countries with the local predators, herbivores, and vegetables, and how three men and their sisters in a puzzle based on dishonourable conduct have been replaced by various social archetypes – husbands and wives, masters and valets – as the tastes of early modernity gave way to later sensibilities and prejudices.

The book tries to appeal to both amateur mathematical historians and puzzle aficionados – and risks leaving both dissatisfied. The historical narratives are short and, with few exceptions, unrelated to one another. Those that do have recurring characters or themes are scattered throughout the text with little warning or clear pattern. On the other hand, Bellos speaks directly to the reader throughout the text, commiserating with and often teasing them when puzzles are particularly challenging. This is usually entertaining, but comes off in moments as trite, drawing attention away from the puzzles themselves. The book also lacks a conclusion, leaving a feeling of irresolution that proves unsettling for a self-proclaimed puzzle lover — though perhaps that's precisely the effect he intends!

Overall, this is a book worth reading. It is best taken in pieces, a few pages and a few puzzles at a time. Bellos reiterates throughout the text that puzzles are, and have always been, intended to entertain and to sharpen. With this book, Bellos fixes himself into a millennia-long tradition of using mathematics to inspire and entertain.