"I'd definitely recommend people to go on to do A-levels. They give you more qualifications and therefore better career opportunities." 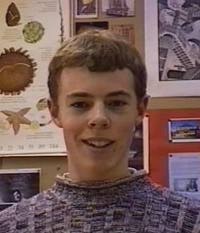 We spoke to Mark Langley about his life as an Upper Sixth Former at Hills Road Sixth Form College in Cambridge, his A-levels and Additional Studies. He also told us about his plans for the future and passes on some tips from his own experiences in applying for a degree place. Mark went to a village school (11-16) where he took 9 GCSEs (Maths, Geography and History, Double Science, English Literature, English Language, Technology and French). He is now studying for three A-levels: Geography, History and Maths. He is planning to do a History degree and is the first member of his family to apply to go to University.

Mark is also "a big fan of watching football and playing it every now and then with my friends. In the Summer, me, my father, my brother and my brother's best mate all got tickets to see the England Euro 96 matches. At one particular match, England were playing the Netherlands, the ball got kicked into the crowd, from right down the other end of the pitch. The ball got closer and closer and I realised it was going to hit me so I caught it: the official match ball! England eventually went on to win 4-1 so I was quite a proud man because everyone around me applauded when I caught that ball. Also, I had my photograph taken with Frank Skinner, the one who sang a song to encourage the team. He was just sitting a couple of rows back. They are quite good memories of what happened".

Mark has found A-levels to be "quite a big step" from GCSEs but says that teachers help ease you into them. His attitude at GCSE also helped "I think I was quite a conscientious student at GCSE and still am at A-level. I'd say there is a sharp difference in work-load between GCSEs and A-levels. I think you are expected to do 5 hours homework per subject per week - but I know for a fact that no one ever keeps to just that. You do more. When I was doing my GCSEs, I was going to bed about 10p.m. Now I stay up to do work until 11 or even 11.30 p.m. But, on Friday night work goes on hold. I'm in a fairly large friendship group, and we all decide to go out to the cinema or the pub or whatever. We need to socialise and cool down a bit otherwise you can get bogged down and worry too much. The social life is much better at the Sixth Form college than where I used to go to school, because here I can know people from a much wider area"

When asked why he chose Maths he said: "Good question... in History and Geography you are writing essays, but in Maths you are problem solving. Obviously I enjoyed it at GCSE level so those are the two reasons really. I would definitely recommend this type of course. My teacher at my old school recommended me to it".

The Maths course enables him to take several smaller exams throughout the course instead of one main exam. "We do Pure Maths over the full two year period: but Applied Maths is split into six units which is made up mostly of statistics and mechanics. Each unit lasts two to three months. At the end of that time, we have to submit course work, and finally do an end of unit test. Then we can forget about it and go on to the next unit."

His favourite component is Applied Maths because "as the title suggests it can be applied to present day terms. I find Pure Maths just a little bit difficult but that doesn't mean I don't enjoy it, I just prefer the Applied and particularly the Probability rather than the Mechanics." He normally gets a small amount of homework at the end of each lesson "but it isn't usually anything difficult. We get set exercises during the lesson and if you haven't finished it, the teacher will just say could you finish it off and then we'll be ready to start the next section, next lesson". Getting a graphical calculator was strongly recommended at the start of the course and Mark has found he uses it at every lesson, "I would say that it's impossible to do it without a calculator".

Mark feels he has chosen the right A-levels for him and is enjoying the courses. But he finds it "frustrating to hear on the news that A-levels may have got easier. I think the people who say that don't really know much about it. I can't say they have got easier because I haven't seen an A-level paper from 20 years ago. I know the teachers here and the students work hard together to equip you as well as possible for the exams. So, I don't know if it has got easier but I know for certain it isn't easy".

Mark told us a bit about the Additional Studies courses: "You do about 9 subjects in the Lower Sixth, from a list of about 100. They're courses which run mostly for a ten week period: one lesson a week. One of the compulsory courses was computer literacy and information technology, known as CLAIT. We learnt about spreadsheets, databases, word processing and graphical representation of data. We were set various tasks. At the end of each task, you were set a test, and if you passed three tests, you were given a certificate saying that you were computer literate. I think it is very important to be computer literate especially when doing A-levels and in the workplace. It was very helpful.

Another Additional Studies course I decided to do was sports leadership which runs over two terms, for twenty weeks in all. We learnt how to coach little children. In the first term, we learnt first aid: what to do if there's an injury and how to deal with bystanders. In the second term, we got to teach the children and that was a really good experience which I'd recommend. I became more confident in speaking with children and teaching them how to play sports properly. I found it to be quite good fun. I think we taught about 30 children, and when they were appreciative at the end of each lesson it was very nice to see."

We asked Mark if he thought these studies could get in the way of A-levels? "Maybe as it is voluntary work, but people have criticised A-levels for being too narrow, because we only do three subjects. In the French system, I think they do 6-8 subjects. Additional Studies have helped me to broaden my knowledge, so I don't think they do get in the way."

Mark has decided he'd like to go to University and has applied to six places. At present he is most interested in getting into Durham or Kent. "I don't really want to leave the area and particularly the family. But, I realise now in order to make something of myself it's better to go to University and get a degree, a really good qualification which will help you in any future career. I have made the decision to do history basically because it's the one I enjoy most of the three A-levels. I like expressing my thoughts and opinions down on paper in an essay."

We asked Mark how he set about making up his mind to go to University and what things in particular had been useful in reaching his decision. "I spoke to my Mum and Dad about going to University and they were supportive which was nice. I also spoke to my form teacher and my history teacher, he told me that I would be suitable for an undergraduate history degree. My Dad and oldest brother, who is 28 and lives at home, are electricians. It's a little family business. If, say, after I did a degree, I can't find a job anywhere my Dad says there's a job waiting here as an electrician. That is a big bonus. Also, my friends who've been to University really enjoy the social life."

From his own experience, Mark recommends other Sixth Formers "to go for a careers interview as early as possible if you're not sure what you want to do because although there's two years to decide, it does go quite fast. If you get your interview in earlier you start thinking about your future more. I went for one last February. It focused on what happens after this College which is: (a) have a gap year and think about your future in that year or (b) go to University or (c) get a job. I thought it would be best for me to go to University. It made me realise that I had only until the UCAS deadline in December to decide. Ask your teachers to help you choose which subjects you want to do. You can read the prospectuses. I didn't until after that interview when they made me aware of how to choose a subject and University.

Another thing I definitely recommend to people is to go on a University Open Day. I went to one at Leicester University and that was quite beneficial finding out what they had to offer."

Viewing the future Mark says: "I'm looking forward to meeting new friends at University from further afield and spending three years with them. I don't know what career I'd like to do just yet. I've got three years to decide so I'll see what happens nearer the time. If I did become employed in an area where Maths is needed I would feel comfortable because I have learnt some of the mathematical techniques. I wouldn't rule out a job where Maths is needed".