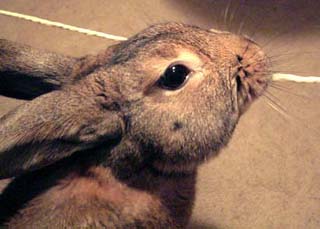 Now, let's make some assumptions. Let's assume that Buster, being a very large rabbit, is also very cunning and can seamlessly join the two ends of the piece of string to make a large loop. Lets also assume that the planet Earth is not a slightly squashed ball with a bumpy surface but rather a perfectly smooth sphere - this is, after all, how it appears to big Buster.

As most readers realised, this is a "shaggy rabbit story" disguising a very simple fact - if you increase the circumference of a circle by a certain amount, you increase its radius by 0.16 units of length, regardless of the size of the circle you start out with.

This is easy to see: Suppose you start with a circle of circumference

and then add 1 unit length to the circumference. Since

, which is approximately 0.16. This figure does not depend on the value of

So the solution to the puzzle is that the string can be held out from the equator by about 16cm all along its length.

It seems surprising - at least to us here at Plus! - that a metre's slack gives you the same amount of clearance, whether you are wrapping string around the equator of the globe or just a basketball!

MIND = BLOWN
Easy to get the answer ... impossible to grasp the generalization