Squeeze me, stretch me

At this very moment, disturbances from outer space are stretching and squeezing you. Knowing exactly when and by how much you are squashed or stretched will enable humans to learn much more about our universe, perhaps even telling us more about the Big Bang, or shedding light on the mystical "dark matter" that is posited to exist in huge quantities throughout the universe. 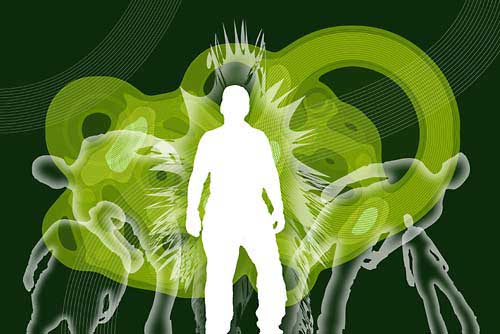 Gravity waves are among the consequences of Einstein's General Theory of Relativity. This is the one that basically says that the curvature of spacetime is equal to the matter in it. If you take a large flat rubber sheet (and call it spacetime), and put a bowling ball (matter) in the middle of it, the rubber sheet becomes curved. If you put different matter on the sheet, it curves differently. On the rubber sheet, before you put the ball on it, the shortest distance between two points is a straight line. When you put something heavy in the middle, you can no longer go in a straight line staying on the sheet, and the shortest distance is called a geodesic. 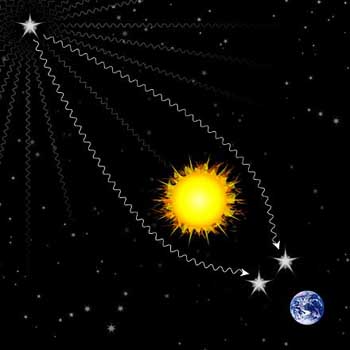 Light always takes the shortest path, so it always travels along geodesics. Since geodesics aren't always straight, light doesn't always travel in straight lines. If a star is hiding behind our sun, it is possible that we could still see it, because light travelling from it to us can be bent around the sun. In 1919, there was a total solar eclipse in Africa, and a group of physicists went to watch. The sun vanished behind the moon, and the physicists could see the stars that were normally hidden by the sun's glow. Their measurements showed that at least two of the stars they could see were in fact the same star, with light taking different paths, bending around our sun, to get here. Einstein and his theory became instantly famous.

If you are finding it hard to imagine how there can be more than one "shortest way" between two points, here is an analogy. If you want to get to New Zealand from England by the quickest way, you can actually leave England pointing any direction you want. This is because the Earth is curved, and because New Zealand is on the opposite side of it.

Another completely different effect of general relativity is that time travels at different speeds, depending on how much matter there is around you. If you have the misfortune to fall into a black hole, you will see the rest of the universe speed up, and someone watching you would see you slow down. This effect on clocks is real, and has been measured by comparing very accurate clocks at sea level, up mountains, in the air, and in space. So the secret to eternal youth is to get close to the heaviest object you can! 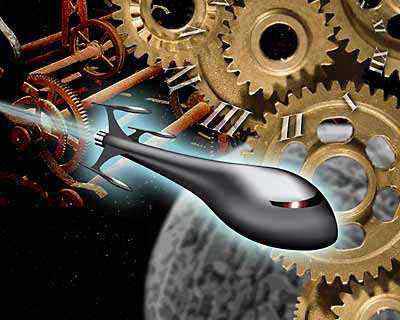 The tiny size of gravity waves has made them very difficult to find. Einstein first predicted in 1918 that heavy objects, such as two stars moving around each other, would give off gravity waves. Since then, many people have tried to find them - to do so would be more evidence for the theory of relativity, and would give us a new, powerful way of looking at the universe.

The best way to detect gravity waves would be to measure one of those tiny changes in distance they cause. This could be done by getting something large, with ends exactly parallel, and then constantly measure the distance between the ends. If the distance changes, you've detected a gravity wave.

But it's not that simple. If a car goes past on the road beside your laboratory, it will shake the ground and your detector, causing a change in distance far greater than anything caused by the wave you are trying to find. Then there's also the problem of the atoms in your detector. They jiggle around, as all atoms do, all the time. Again, this jiggling has a much greater effect than a gravity wave.

There is hope, however. There are currently several projects around the world that will start working within a few years. For example, there is LISA (Laser Interferometer Space Antenna), a space-based system that uses lasers and mirrors. Another is LIGO (Laser Interferometer Gravitational wave Observatory), which uses the same type of system. Both these systems split a laser beam into two parts, send them a long distance at right angles to each other, and then reflect them back. When the beams are joined again, the resulting interference pattern will show whether there is any distance change. If these detectors overcome the difficulties faced during earlier experiments, we can expect to have a whole new way of looking at the stars.

Not just a space oddity

Humans have gazed at the stars for millennia, and wondered how they work and how the universe originated. We discovered a little with the naked eye. And we discovered much more once the telescope had been invented - it allowed us to develop (and confirm) theories are still considered today to be generally good approximations. Then, in the 1960s, the radio telescope enabled us to "see" what had not been in our visible range before, and we found new stars that didn't emit visible light - for example, pulsars - and the Cosmic Microwave Background, which is evidence for the Big Bang and other cosmological theories. Detecting gravitational waves, and, more particularly, the particular patterns they exhibit, will mean we can see anything that has matter, not just those objects in space which emit light. So gravitational waves are useful, not just a mathematical oddity.

Our current theories suggest that, in comparison with the stuff we can see at the moment using visible and invisible light waves, there could be as much as ten times more stuff we can't see yet, and this is all busy emitting gravitational waves. It would be wonderful to be able to detect this "dark matter". The better the information we have, the better we can figure out how the universe works and how we got here.

Why are we so confident that gravity waves are even there? After all, we've yet to find them directly. The answer is that there is excellent indirect evidence. It is possible to mathematically rearrange Einstein's equations (with some simplifications) to find out how much energy should be lost due to gravity waves in a particular situation. This is done by considering a small change, a perturbation, to flat space. Solving Einstein's equations in full is very difficult, so here, any terms in the equations that are much smaller than the rest, for example, (speed divided by speed of light, squared), are ignored, making the equations simpler. This loss of energy, calculated from the equations, leads to a change in the length of time of an orbit. The change in time can be measured, and if it matches (and there's nothing else causing a change in orbit), we have confirmation. This was first done in 1976, using information from a radio telescope, for a binary pulsar system, and the information from that star system is still consistent today.

Now it is important for theoretical physicists to make better approximations than before, so that when the new detectors start giving us data, we can read and understand it, and learn more about the universe, and what stretches and squeezes us. 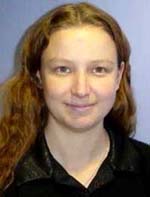 Anita Barnes is in the third year of her PhD studies at the University of Cambridge. Her work is on numerical General Relativity, supervised by Dr John Stewart.

The term "gravity wave" refers to waves typically on the ocean or in weather systems where the restoring force is gravity (as opposed for example to capillary waves where it is surface tension). Those related to GR are called "gravitational waves". Unfortunately, the Oxford English dictionary has picked up on the phrase "If the distance changes, you've detected a gravity wave." from this publication and used it as an example to claim that "gravity wave is another name for gravitational waves".