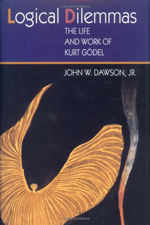 Logical Dilemmas: The life and work of Kurt Gödel

One of the things I enjoy most about biographies of mathematicians is the presentation of mathematics as a very human endeavour. Despite the sometimes abstract nature of mathematics, we see in this biography of Kurt Gödel that it is a very human activity pursued by people within a deeply connected community, but each with their own vision of truth.

Gödel is presented as a man on a lifelong quest for rationality in his work, but this sharply contrasts with the irrationality he demonstrated in his own life. He was a hypochondriac and suffered periods of illness and mental instability, in later life he suspected he was being poisoned and his wife would taste his food for him before he would eat it.

And there was scandal in his love life too. His family strongly disapproved of his wife Adele, a divorcée who was 6 years older than Gödel, had a port wine stain on her face and was a dancer at a Viennese night club called "The moth". Dawson emphasises the risk personally and professionally Gödel exposed himself to through his relationship with Adele, and explained how his choice of cover illustration — a print of the American dancer Loie Fuller portraying a nocturnal moth — illustrated the "shadowy, creature of the night" that the German term for moth suggested.

Gödel lived during some of the most tumultuous periods of recent history: the First and Second World Wars. One of the aspects of the book that was so interesting was seeing Gödel's life and work in context of these world events. He also lived through controversial times in the mathematical world, I particularly liked the description of the mathematician Zermelo as "a battle-scarred veteran of the conflict over the Axiom of Choice"!

As any good maths biography should, this book gives equal prominence to Gödel's mathematics. Dawson's background as a logician means that he doesn't shy away from including many of the details of Gödel's results, proofs and their implications. This makes the book mathematically quite dense, and some of the chapters could be quite daunting for a non-mathematician. But Dawson also gives very lucid explanations of the meaning and impact of the mathematics in plain English, so the mathematical detail could be skimmed over by the faint-hearted.

One aspect of the mathematical component of the book that I particularly enjoyed was the chapter on the history of logic. This concise summary is like a tour through the world of logic from the Greeks and Aristotle, the theological debates in the Middle Ages, to the modern players of Boole, Bertrand Russell and Cantor. Again the detail on the people involved and the progression of ideas through history emphasises the human side of the subject. This also arms the reader with the vocabulary and background necessary to tackle the detail of Gödel's own work and its repercussions.

Unlike some biographies, Dawson takes no liberty with his subject and never presumes to speak in Gödel's voice. Instead he builds up a picture of Gödel, piece of evidence by piece of evidence, from the wealth of varied sources he had access too. This includes Gödel's own Nachlass — "a scholarly midden" containing "almost every scrap of paper that crossed his desk, including library request slips, luggage tags, crank correspondence, and letters from autograph seekers and mathematical amateurs". At one point Dawson uses Gödel's library request slips to try to identify exactly when he started his work on the famous incompleteness theorem, and what lead him to this subject. It is in these references to the sources that we get a sense of the biographer's background cataloguing Gödel's papers in Princeton.

This book is a comprehensive account of Gödel's life and work. It gives a real sense of Gödel as a man, and what an interesting character he was. I particularly enjoyed learning how Gödel's relationships with others were vital in his success professionally and personally, whether they were his professional peers, his family or his friends. The book is a fascinating way to learn about Gödel's mathematics, within context of his personal life, and the mathematical and wider world at the time. The depth of the mathematical information makes it ideal for a reader with some mathematical background, though it would be accessible to a wider audience if they are prepared to work through the more technical sections. Most of all, I enjoyed the book as a celebration of the very human endeavour of mathematics, and of Gödel, a very human man indeed.