The 2006 Templeton Prize has been awarded to Professor John D Barrow, eminent cosmologist and director of the Millennium Mathematics Project, the family of educational initiatives which includes Plus. The prize honours Barrow's contribution to "progress towards research or discoveries about spiritual realities", and is valued at £795,000. Previous prize winners include physicist and Nobel laureate Charles H Townes, cosmologist George FR Ellis and the well-known physicist and mathematician Freeman J Dyson. 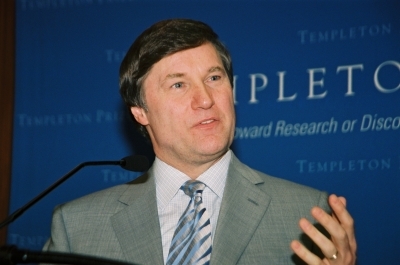 The Templeton Prize was founded in 1972 by Sir John Templeton, and is awarded annually to a living person to encourage and honour the advancement of knowledge in spiritual matters. It's the world's best-known religion prize and the largest annual monetary prize of any kind given to an individual.

Science and religion are often portrayed as diametrically opposed, and so the fact that scientists often receive the Templeton prize may, at first glance, seem surprising. But ask yourself questions like "what is the origin of matter?", "what is the nature of infinity and nothingness?", and "how come the constants of nature happen to be just right for us to exist?" and, for all your scientific knowledge, you soon find yourself on territory that is equally significant for theologians as it is for scientists. In his 17 popular books and over 400 scientific papers, Barrow uses maths, physics and astronomy to explore these and other mysteries that lie on the boundary of human knowledge. His multidisciplinary approach and the views he thus created have, as the Templeton Prize announcement put it, "jarred religious and scientific perspectives in such a way as to open pathways of understanding which may allow both to comprehend each other more fully."

"The hallmark of his work is a deep engagement with those aspects of the structure of the universe and its laws that make life possible and which shape the views that we take of that universe when we examine it," said Thomas Torrance, who himself won the Templeton Prize in 1978. "The vast elaboration of that simple idea has lead to a huge expansion of the breadth and depth of the dialogue between science and religion."

Barrow, 53, is Professor for Mathematical Sciences at the University of Cambridge, Fellow of the Royal Society and Gresham Professor of Astronomy. He first achieved wider fame in 1986 with the book The Anthropic Cosmological Principle, co-authored with Frank J Tipler, which explores the seemingly amazing coincidence that all the constants of nature — the strength of gravity or the weak nuclear force, for example — are just right for life forms such as ours to develop. Were they slightly different, life as we know it would be impossible, and this fact has lead to a lively debate about the role of intelligent life in the universe. 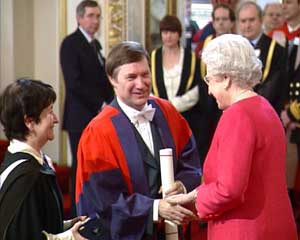 Other works include the books Theories of everything: the quest for ultimate explanation (1991) and Impossibility: the limits of science and the science of limits (1998), as well as books exploring the connections between the nature of the universe and human aesthetic notions. His latest book is The infinite book: a short guide to the boundless, timeless and endless. Notably, Barrow also wrote a play, Infinities, which was produced in 2002 under the direction of Luca Ronconi and won the 2002 Premi Ubu and the 2003 Italgas Prize. The play delves into scientific and spiritual aspects of notions of infinity, and uses unconventional staging techniques, like having the audience wander through corridors of mirrors.

Barrow's work clearly highlights the human quest for meaning and understanding that lies at the heart of both science and spirituality. In his statement at the Templeton Prize news conference he said: "Astronomy has transformed the simple-minded, life-averse, meaningless universe of the sceptical philosophers. It breathes new life into so many religious questions of ultimate concern and never-ending fascination. [...] The concept of a lawful universe with order that can be understood and relied upon emerged largely out of religious beliefs about the nature of god."

Barrow will receive the prize from the hands of Prince Philip, the Duke of Edinburgh, in a private ceremony at Buckingham Palace on the 3rd of May. This is Barrow's second visit to Buckingham Palace in three months: in February he accepted the Queen's Anniversary Prize for Higher Education on behalf of the Millennium Mathematics Project.