You're more than the sum of your genes 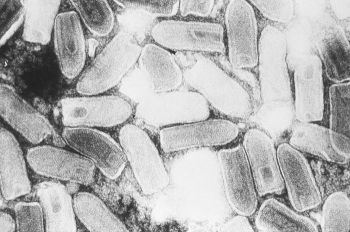 This electron micrograph depicts VSV, the virus responsible for vesicular stomatitis (VS) in horses, cattle and pigs. Image courtesy the US Department of Health and Human Services.

Kwang-il Lim and John Yin considered the vesicular stomatitis virus, which is related to the rabies virus and in cattle produces similar symptoms to foot and mouth disease. The virus is made up of just five genes, named N, P, M, G and L, which appear in the order NPMGL in the genome. The expression of an individual gene depends on where in the string of all five genes it is located, so it makes sense to ask how and if the virus changes if the order of the genes is shuffled. But even with only five genes involved, there are 120 possible orderings. While scientists do have the ability to engineer mutants with a particular gene ordering, physically producing all 120 types of mutant is beyond reach.

So Lim and Yin used mathematics and computers to produce virtual versions of all possible mutations and to see how each fares. In earlier work, they had developed mathematical equations which describe the life cycle of the virus, based on their theoretical understanding of the core genetic mechanisms that regulate the behaviour of the virus, and quantitative knowledge on the interaction of the virus and its host. Setting the parameters in these equations so that they reflect the various gene orderings, as well as a given type of host — baby hamster kidney cells, for example — they then fed the equations to a computer and let it simulate the virus's behaviour for each of the 120 different orderings. They measured the fitness of each mutant by the number of offspring virus particles it produced: the more particles, the fitter the variant.

The computer simulations suggest that the positions of the five genes along the genome does play an important role in the virus's growth. The locations of the N and the L genes seem to be particularly important: those mutants with N in the first position and L in the last grew much better than others. But where exactly should the other genes be located? To find out, Lim and Yin took an excursion into the world of politics. They regarded each virtual offspring particle as a voter, who ranks the five candidate genes according to their ordering in the particle's parent: the gene that comes first in the parent's genome is ranked first, the gene that comes second is ranked second, and so on.

Lim and Yin then employed two simple metrics. The first involves computing the average ranking of each of the five genes over all the voters' rankings. The second looks at all pairs of genes and computes the proportion of voters who ranked one gene in a pair higher than the other. Both approaches suggest an optimal ranking, and in both it is the same: NMGPL. 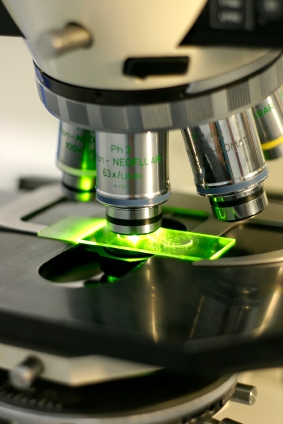 Computer modelling puts microscopes out of a job.

It's a satisfyingly clear result, but it's also surprising. The gene ordering of the naturally occurring wild type version of the virus is different, it's NPMGL. In fact, there is another ordering that seems to grow better than the wild type. If the virus is a result of natural selection, then why didn't it evolve more optimal orderings? One possibility is of course that the mathematical model used by Lim and Yin doesn't take account of some vital, but unknown, genetic processes. It may also be that the two host types that were used in the simulations — baby hamster kidney cells and delayed brain tumour cells — are significantly different from the cells that the virus infects naturally. But Lim and Yin, backed up by further simulations, suggest that rather than revealing a fault in their methods, this result points to the fact that other regulatory mechanisms play an important part in the evolution of the virus, so that the wild type can still perform optimally, even if its gene ordering is sub-optimal. Whatever the right answer, Lim and Yin's work sheds some light on the complicated genetic processes that govern viral growth and evolution. And it clearly suggests that gene order is one of them.

Few people would harbour friendly feelings for a rabies-like virus, but these new results may actually enable us to help it do good. Some viruses, including the one in question, have the ability to stimulate immune response or destroy tomours. But their exact behaviour depends crucially on their growth rate. Lim and Yin's results on how this growth rate depends on gene ordering may prove important in harnessing the virus's good traits for use in virus-based vaccines, gene therapy or cancer treatment.