The Plus new writers award 2009 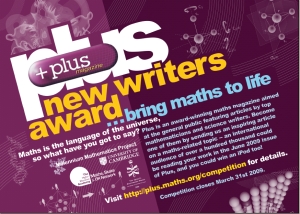 Plus is looking for the science writers of the future, who can make mathematics lively and interesting for a general audience. The Plus new writers award gives our readers a chance to join our acclaimed list of authors, including physicist Stephen Hawking, mathematician and writer Marcus du Sautoy, and NASA astronaut Michael Foale.

The competition is open to new writers of any age and from any background who can explain a mathematical topic or application they think the world needs to know about. The winning entries will be read by an international audience of over a hundred thousand in the June 2009 issue of Plus, and the winners will receive an iPod, subscriptions to the journal Nature, and signed copies of popular maths books by some of the best science writers today.

The competition will be judged by three prominent mathematicians and science writers — judges in previous years have included the acclaimed mathematicians and writers Ian Stewart, John D Barrow and Marcus du Sautoy. The closing date is March 31st 2009.

There are three categories in this competition: secondary school and sixth form students, university students (both undergraduate and postgraduate) and the general public.

If you think you can share your passion for maths with the general public, then visit the competition page and get writing!!

The Plus new writers award is kindly supported by the Maths, Stats and Operational Research Network, a Subject Centre of the Higher Education Academy. Plus would also like to thank the journal Nature for donating subscriptions as prizes.