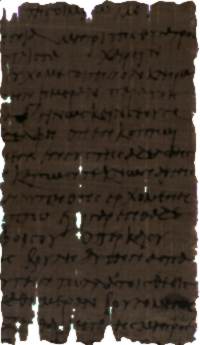 Mathematical works that have been lost for two thousand years will soon be restored, along with hundreds of other works of ancient Greek and Latin authors, through the use of new imaging technology.

The works were buried in the so-called "Villa of the Papyri" in Herculaneum by the catastrophic eruption of Mount Vesuvius in AD79. In 1752 excavators in Herculaneum found the remains of a private library, the property of a wealthy Roman statesman, Julius Caesar's father-in-law. Over 1200 scrolls have been found, charred but preserved by the lava and mud that covered them. This represents only a small proportion of the library - there are hopes the main library may yet be there to be discovered - but is still a huge treasure trove of lost works. Most of the scrolls could not be unrolled, but had instead to be dissected and the fragments recovered.

The scrolls were covered in superheated mud at around 325°C. If it had been slightly hotter, they would have burned entirely; a little cooler and the papyri would not have been preserved. Unfortunately, though, the process of carbonisation which preserved them has also rendered them, till now, largely illegible. However, new technology in the form of "multispectral imaging" is succeeding where previous attempts have failed.

Multispectral imaging involves taking digital images of a document using, for each area, whichever part of the spectrum enables most information to be recovered. Its use for reading ancient manuscripts has been pioneered by Steve Booras at the Center for the Preservation of Ancient Religious Texts, part of Brigham Young University, the Mormon university. Booras had already used the technique successfully to read Greek papyri from a site in Petra that burned down in the early 6th century. Preliminary tests with the Herculaneum papyri have shown that they can be made clearly legible, even where no ink was previously visible.

Among the works scientists hope might be included in the scrolls are 30 lost dialogues of Aristotle and works by Archimedes and Euclid, as well as lost works of Sappho, Virgil, Terence, Seneca, and others.