'A brief history of infinity' 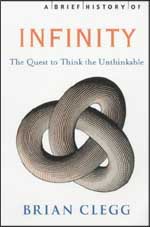 A brief history of infinity: the quest to think the unthinkable

Infinity is more than simply the biggest ever number, and even this simple description has caused problems for mathematicians throughout the ages. From the ancient Greeks to Newton, from Newton to present-day mathematicians such as Cristian Claude and Boris Pavlov of New Zealand, infinity has posed both practical and conceptual problems.

This book begins with a brief description of how most people nowadays think of infinity, then looks at how sequences of numbers continue without end. This leads to the perceptions ancient Greeks had of numbers, and a consideration of the famous paradox of Achilles and the tortoise. We are then quickly taken through the ideas that held during the Middle Ages in the Christian world and beyond, which included equating God and infinity, before learning about the contributions of Galileo, Newton, and Leibniz. Isaac Newton and Gottfried Leibniz in particular had a long-running battle over the invention of calculus. This is included because calculus depends on the infinitesimal, which is the number closest to zero.

Cantor, who eventually went insane - possibly from his research - has several chapters based on his work. He formalised set theory, and in doing so, contributed much to our current understanding of infinity, including showing that there is more than one infinity, and one infinity can be larger than another. The most recent developments, many of which are based on Cantor's work are also explained, and the book ends by explaining another paradox - a shape that has a finite volume, but infinite surface area.

A brief history of infinity does what it says on the tin. Although many of the mathematical concepts around the development of our understanding of infinity are explained, the emphasis of the book is on the history, with brief biographies of many of the important players and accounts of the conflicts they were involved in. This does not mean the mathematics is lightweight - although the reader isn't assumed to have any prior knowledge, it will probably be easier to understand the concepts involved if you already have some understanding of how pure mathematics works.

Anita Barnes has just finished her PhD studies at the University of Cambridge. It was on numerical General Relativity, supervised by Dr John Stewart.