If you have a thing for cracking codes and solving mysteries, then the University of Southampton National Cipher Challenge is for you. Although the competition is only open the UK students under the age of 19, everyone can follow the unfolding mystery and try their hand at deciphering the encrypted messages. 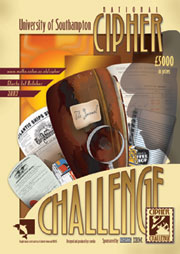 Rather than just consisting of codes to crack, the competition is structured as the story, set in 1911, of Agatha Highfield, a fictitious archaeologist trying to prove herself in this male-dominated field. As she attempts to obtain the Babylon Stone - a legendary, and possibly cursed, tablet inscribed with Babylonian mathematics - she records her adventures in a diary, encrypting eight of her entries for reasons which will become clear as the story unfolds.

The first encrypted message will be published on the competition website (www.maths.soton.ac.uk/cipher) at 4pm on Thursday October 2nd and further episodes will be released over the period leading up to Christmas. The overall winners will be invited to a public Prizegiving at Bletchley Park in 2004.

The competition was originally inspired by Simon Singh's cipher challenge, and last year attracted over 2,000 entries from more than 250 UK schools. Singh believes that the challenge can inspire young people. "It shows how maths can be applied in the real world and generates a real excitement around the subject," he said (read more about Simon Singh and the science of secrecy in Safety in numbers from Issue 21 of Plus).

Last year's Cipher Challenge was structured as a fictitious correspondence between three great scientists of the 19th century - Charles Babbage, Countess Ada Lovelace and Charles Wheatstone - as they searched for a missing cipher machine. The overall winner, David Simner, said that the competition gave him a chance to use mathematics on real problems rather than artificial ones.

So why not try your maths on the Babylonian Stone mystery - fame, glory and even prizes may await.