CAPTCHA if they can

Tests previously of interest only to philosophers and artificial intelligence theorists are now being used to hinder the everyday evil of spam email.

The brilliant English mathematician Alan Turing - instrumental in breaking the Enigma code during World War II - is widely regarded as one of the founders of modern computer science (see "What computers can't do" in Issue 5). In a 1950 paper, he described what he called the Imitation game, now known as the Turing Test, in which a person (in a separate room) tries to distinguish between human and computer test subjects by asking them each a series of questions. If the person can't distinguish between the computer and the human, the computer is deemed to be intelligent. There is a (currently unclaimed) prize of $100,000 for a computer that can pass the Turing Test.

By definition, the original Turing test requires a human being to judge between the two candidates. However, researchers from the Carnegie Mellon School of Computer Science have developed a version of the test that dispenses with the human judge - the "Completely automated public turing test to tell computers and humans apart", or CAPTCHA for short. 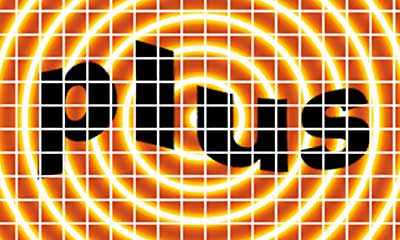 CAPTCHA works by presenting an image of a word that has been distorted and obscured so that a computer is not able to recognise it, while a human still can. For example, the text of the word "plus" on the right was skewed and placed on a patterned background, before the image was chopped up into a number of pieces. To pass the test, a candidate must correctly type such a distorted word (or number of words in some versions).

Spammers not only use robot programs to crawl the web looking for email addresses to send spam mail to, but also use similar robots to apply automatically for free email addresses from which to send the spam. Hotmail and Yahoo are now preventing this by putting a CAPTCHA style question in their standard registration forms. An applicant who can't read the word doesn't get an email address. So the use of CAPTCHA goes at least part of the way to stopping spammers.

It is nice to know that in an age when computers seem to be so vulnerable to problems - viruses, spam emails, security breaches - computers are now beginning to police themselves, even if it is by failing Turing's test for intelligence!

Further information on Alan Turing and the Turing Test:
The Alan Turing Home Page
The Turing Archive for the History of Computing