Travel, money, meeting new people and living in new cultures... and a whole lot of sport! That is where maths has lead Jamie Clarke, an IT project manager who specialises in international sport projects such as the recent winter Olympics in Torino. Jamie tells Plus how he went from engineering to the Olympics.

Jamie grew up in Australia, where he studied engineering at the University of Adelaide. Initially he was accepted to study law, but he decided against it as there wasn't as much of a focus on maths, which had always been a favourite subject. "I was really good at mental arithmetic in primary school, and maths was my strongest subject in secondary school." 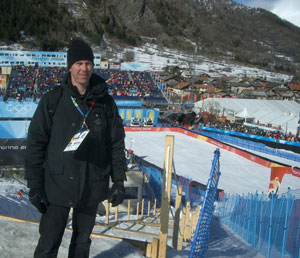 After university, Jamie worked in Port Hedland in Western Australia for BHP, a natural resources company. Jamie worked as a mechanical engineer, but found his job naturally lead into a lot of project management.

"You'd go out on site and there'd be a specific section of machinery, say a conveyor system, that wasn't working efficiently or was broken. So you would look at the problem and design a new system." This design work usually evolved into a larger project. "Then you would get the design approved, go out to tender, award a contract, construct it, install it, commission it, and then hand it over to the operations team. So there was very much a project management focus working in Port Hedland." The projects he worked on were varied: "they were not just mechanical, they were electrical engineering, civil engineering, and a lot of IT aspects".

Jamie found his engineering and maths background helped him with the thought processes and framework he needed for project management. "I didn't use a lot of the specific coursework that you do in engineering, but in a degree like this you learn a lot about time management, problem solving, having good analytical skills, and being able to analyse problems — to look at them logically and rationally and put together a solution."

"Most of the core elements of project management are based on maths. To manage a project you are given something you need to deliver or complete for the project, and you are given a certain amount of time and a certain amount of money to do it. So the objective is to work out what you need to enable you to deliver the project, and manage your resources and budget effectively over that time period." 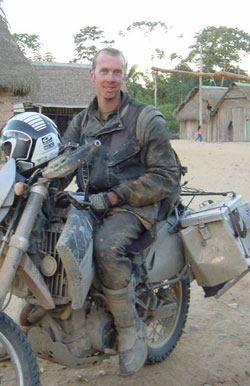 Jamie in the Amazon Basin

It didn't take long for Jamie's love of travel to kick in. "After a few years in Port Hedland I decided to pack my bags and leave Australian shores for a couple of years... and that was eight years ago!" His globe-trotting life had begun and he hasn't lived in Australia since.

After backpacking through Asia for six months, Jamie found himself in London in 1999. "It was the start of the IT boom, and so I decided that there was more potential for good experience there (I enjoyed the IT side of things) and also it was really good money." So Jamie decided to work in IT project management in London, rather than in engineering. "I got a crash course in IT from a friend, and got a project management job doing multimedia software development projects."

Jamie found the transferable skills, such as problem solving and analytical thinking, that he got from maths meant that this move from engineering to IT wasn't a problem. "If you have the core project management skills and abilities, you can diversify so much in project management." He found that he didn't need to know the programming languages required for the software development, as long as the specialist programmers knew what they are doing and Jamie could communicate well with them. "As long as you're smart enough to understand what they're talking about, and to pick up the basic skills of how it all works, then you can project manage anything."

Over the next couple of years Jamie managed a number of IT projects including some in e-commerce and finance. He also managed to fit in more travelling between jobs, including a few months in Canada, and a seven month-long road trip from San Francisco to Buenos Aires on a motorbike. And he found maths even came in handy on his travels: "Maths is really important when you're travelling because there are so many different currencies — if you're not very good at quick thinking with your currencies you never really know how much you're spending!" 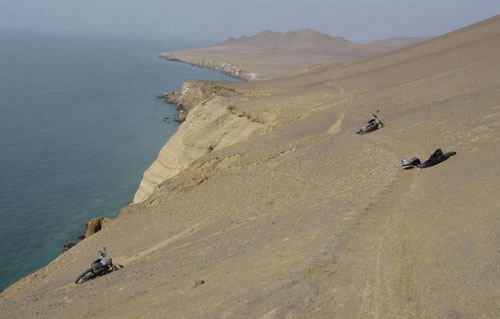 A close call in Peru

Race to the Olympics

Jamie had worked for Visa, a card payment company, before he went on his motorbike odyssey. When he came back in 2002 he got another short contract with them on an IT project, consulting to someone on the team for the 2004 Athens Olympics. He managed to keep extending his contract, and eventually worked and lived in Athens during the 2004 Olympics. Since then working with Visa has continued to enable him to travel: Jamie lived in Torino to work for the winter Olympics that were on earlier this year, and hopes to head to Beijing to consult for the 2008 Olympics, after which he heads to Vancouver to prepare for the Winter Olympics in 2010.

Jamie worked on similar projects for both the Athens and Torino Olympics. "The focus of the projects that I manage are IT based. Most recently I was working at the Olympics managing the implementation of the payments systems at all the Olympic venues. The management of that involves working with other sponsors and local banks to install the temporary infrastructure, so that when anyone goes to the Olympics they can pay using a Visa card."

The Olympics may be a celebration of sporting excellence, but putting them on costs a lot of money. One of the way the hosting city, and the sponsors of the Olympics recoup their costs is through the money spent by the hundreds of thousands of visitors to the Games. They buy food, drinks and merchandise from the many Olympic venues, and for that they need access to their cash. Jamie was responsible for making sure that the payment infrastructure, such as card payment points at the checkouts, was in place and sufficient to meet the needs of all these visitors, allowing them to spend as much cash as they wish! 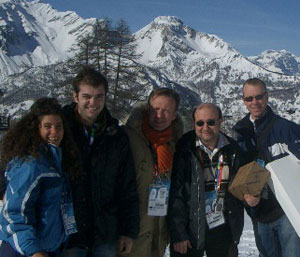 Jamie and his workmates in Torino

For the 2006 Torino Winter Olympic Games Jamie managed up to 30 people and installed over 500 payment terminals in 36 Olympic venues which were attended by over 500,000 people. They spent over 10 million dollars on Visa cards. He says that the first stage in managing a project like this is to put together the team who will manage it, including everyone who has a say in how the project is going to be delivered. "Then you plan the project — you put together a detailed time line of how it is going to be delivered, and you put together a budget forecast."

As part of the planning process Jamie had to look at the risks that might jeopardise the project. "There's maths associated with that, because you look at the different risks, and then you look at the probability of that risk occurring. If you have a high probability that something is going to cause the project to fail, you change an aspect of the project to reduce the probability of that risk occurring." For example, the payment infrastructure for the Olympic venues was reliant on telephone lines. "We thought there was a very high chance that the telephones would not work, so we needed to look at a backup telecoms solution. So we used two telecoms systems — fixed telephone lines, and a mobile telecoms solution. In that way we eliminated the chance of the telecoms failing, and hence our systems failing."

Jamie says that planning the payment infrastructure was an iterative process. The Olympic team and vendors would estimate how many payment terminals they thought should be installed, and these numbers would be modified as the venues and their stock was planned and built. Looking at past Olympics, and the layouts of particular venues or stadiums, Jamie and his colleagues predicted the way spectators would flow through the venues, giving further indication of the number and location of the payment terminals that would be needed.

But the exact number of terminals required in each venue could change right up until the Olympics started, so Jamie had to build contingencies into his project plan and budget to cope. "Again this is where maths comes into it. We estimate we might need 500, but if we have problems or if the requirements change we need extra ones as well."

This wasn't the end of Jamie's logistical problems. He then only had a very short period of time to install the terminals in the venues, as many aren't ready or accessible until the last minute. And he still had to provide support teams to cover all the 36 different venues at all operating hours during the games.

Jamie says his job is not just about managing resources, he also has to manage the relationships with all the people involved in the success of the project. "One of the biggest challenges is learning to work in a different language in a different culture. You are working with a lot of locals and you've got to understand the way they work, and the way they think and the way they make decisions is different to generally how you're used to working."

A whole load of sport!

"The most interesting thing, and why I like my job so much, is it involves some sort of engineering, maths and IT, there's a lot of logistics, some marketing, and you get to see a whole load of sport!" And watching sport isn't the only perk. Jamie also lists "travel, staying in nice hotels, meeting lots of people, and working in different cultures and languages" as other benefits of the job.

Jamie has found that his background in mathematical sciences at university has been the key to doing his job well. Now you can study project management at university, but taking a maths or engineering degree can give you some advantages. "The biggest thing you can take out of engineering is to be able to diversify in project management." The transferable skills such as problem solving skills, analytical ability and logical thinking that a mathematical science degree trains you in, are the skills that can allow you to manage any kind of project. And if you're lucky like Jamie, that project might offer the opportunities for travel and watching a whole lot of sport. 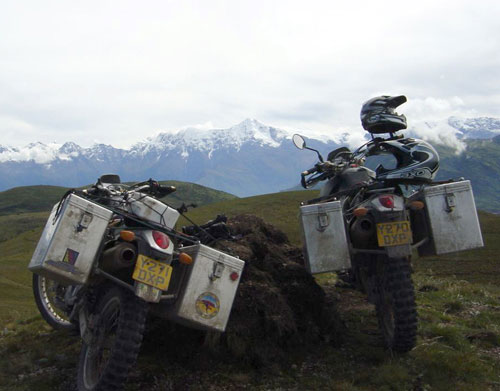 The view from here is great...