Mathematics is an integral part of Adrian Bird's job as a performance engineer at Rolls-Royce. "It involves analysing the thermodynamics of aircraft jet engines to try to understand their workings," Adrian says. He's currently working on the Trent 900, the huge A380 airbus that is being developed. But despite always enjoying the subject, Adrian's mathematical career nearly didn't come to be.

Moving on from bad advice 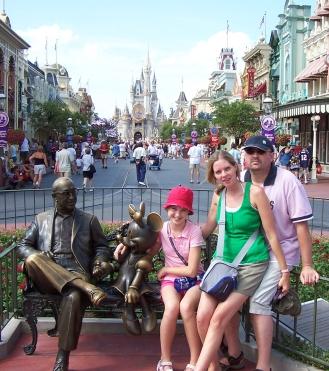 Adrian Bird with his wife Clare and daughter Paige in Florida.

After messing about in his third year of secondary school ("as you do!"), Adrian was not allowed to go on to do what was then called O level maths. So he completed the academically lower-ranking CSE (later on GCE and O level were combined into the current GCSE), during which he found the maths "quite easy", and left school in 1982 to join the British Army. But even this decision did not gain the support of his career advisors, who told him that he wouldn't last.

Determined to prove them wrong, Adrian spent seven years in the army, which included an apprenticeship as a carpenter and joiner. He still couldn't entirely escape from the academic side of things: "Even in the Army, because I was in the Royal Engineers, we still had to use a certain level of maths." His work required basic arithmetic and trigonometry, but thankfully there were classes in mathematics as part of his training. Adrian enjoyed his time in the Army, and apart from providing him with an apprenticeship and valuable work experiences, he also got to travel all over the world.

Finally, in 1989, he decided it was time for a change. Adrian left the army and worked as a joiner for several years. At the end of 1992 an opportunity to work for Rolls-Royce came up. It came at just the right time, too, as his contract work was beginning to dry up. 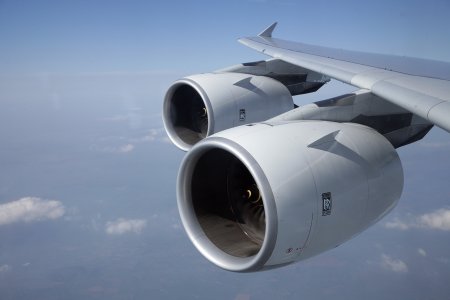 "I first joined Rolls-Royce as a General Duties Operative, which is a posh name for a cleaner really!" Since then, Adrian has moved through a number of jobs within the company, and Rolls Royce have also supported him in furthering his education. "While at Royce's I got the opportunity to do an Applicable Mathematics and Computing Degree at Derby University." The company supported him during the degree, giving him time off to study alongside work, and Derby University also gave him flexibility in how he studied. 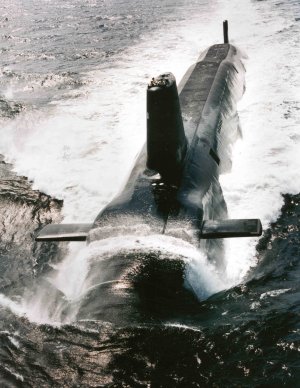 The degree took six years, and during that time he worked in several jobs at Rolls-Royce. "I started off in the Naval Marine sector, as a nuclear materials accountant. Materials accountancy is similar to financial accounting, but we're looking after fissile material. Rolls-Royce make the nuclear propulsion systems for the Ministry of Defence submarines, and you have to account for the nuclear material that is used on site."

From the Naval Marine sector Adrian moved over to Civil Airlines working as a technician. But after the attack on the World Trade Centre in 2001 there were redundancies in the Civil Airlines division and he moved back to his job as a materials accountant in Naval Marine. "Then about three years ago I went back to the Civil Airlines to work on the Trent 900. The maths and computing skills I gained in my degree were useful in the materials accountancy side as much as in the performance engineering job."

As a performance engineer on the Trent 900 engines for the Airbus A380, Adrian has worked on several different projects. "I enjoy working in performance on the Trent 900; it's been a really good team to work for. And the work has been varied, you're not coming in every day and doing the same thing. We went through flight testing the engine last year, to ensure that our understanding of the engine, and our model of the engine's performance, aligned with actual flight test data. We model all the pressures and temperatures throughout the engine, from the fan up the front, through the compressor stages, and out the back through the turbines. Aligning our models with the test flight data is important because the model generates the data that will go into the engine control system, such as power levels and settings. The control system is loaded onto the plane which then controls the four engines to make sure that they all run with the same thrust. You can appreciate if you've got one engine running faster than the others you're going to end up flying in a circle." Indeed the team's mathematical understanding of how the engine operates is vital in ensuring the safe operation of the aircraft. 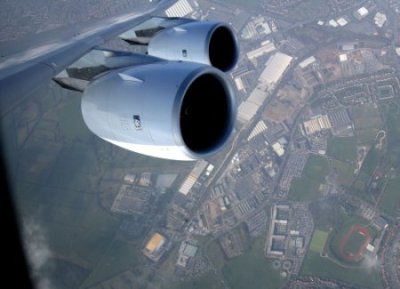 Another view from the Airbus A380. Image courtesy Rolls Royce.

Another recent project provided an opportunity for travel. "I've just been involved in cross-calibrating the SAESL site in Singapore [SAESL stands for Singapore Aero Engine Services Limited, a joint venture between Rolls-Royce and Singapore Airlines]. After an engine is overhauled in Singapore it is retested to make sure the performance is alright. We needed to make sure that the thrust readings [and other test data] that they have in Singapore are consistent with what we have in Derby."

The project took about three months, and involved travelling to Singapore to test an engine there, recording all the relevant data, including thrust, temperature and pressures. The engine was then shipped to Derby where the testing was repeated, and finally shipped back to Singapore to retest a final time to ensure that no damage had occurred in transit. "And then it was a case of using Matlab [a mathematics software package] to try and align the Singapore data with the Derby data." This work involved significant mathematics, such as curve fitting the data and calculating what factors were necessary to line up the curves from the two sites. "The work is to ensure that they are getting the same levels of performance in Singapore as in Derby. The differences in test cell configuration play a major part in the change in engine performance. Climate changes between England and Singapore do not help and limit the engine's operation."

Benefits of the degree

Adrian's degree covered both statistics and applied mathematical techniques, "It gave you a broad brace of skills." And apart from providing the mathematical background he needs for his work, Adrian's maths degree has provided many other benefits. "It's boosted my confidence. And it's also helped me progress through the company. As I started as a cleaner, I'm a bit further up the ladder now! And obviously my pay has gone up with the promotions." 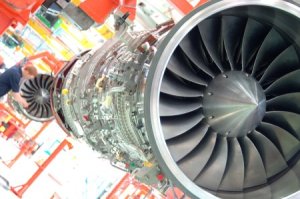 "It's also helped me to help other people. There's a young lad who's submitting his final dissertation this week for the degree that he's doing part-time at Derby. I came up with his final year project so he was happy that he could do something work-based. I can also help out other people who can come to me and ask things. And my daughter's just started senior school, so she's coming home with maths questions as well."

The training from his mathematics degree has made it easier for Adrian to learn new things and move between areas. "It seems to be easier to pick things up. Having done the maths you can flit quite easily from thermodynamics, to fluid dynamics, or to some other stress work. If you have an understanding of the maths behind it, it's relatively easy to jump from one to the other." So this has opened up the opportunities to take on the different jobs Adrian has held at Rolls-Royce. "You tend to be able to jump between roles, for example going from materials accountancy to performance engineering." 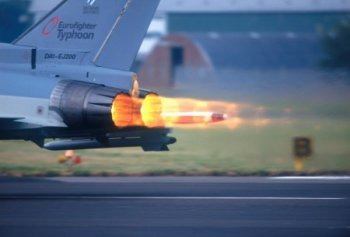 The Eurofighter Typhoon on the runway. Image courtesy Rolls Royce.

And his education isn't over yet. Adrian is now working on a PhD with Rolls-Royce and Derby University. "I'm looking at acoustic emissions in aircraft engines, and trying to analyse those signals to see if we can detect any faults." The project uses data recorded from a military plane, like the Eurojet fighter, whose engines Rolls-Royce makes in Bristol. "The acoustic emission is a bit like the wave on the surface of a pond when you throw a stone in. It travels through the structure of the engine so you can put transducers [which record vibration] on the outside of the engine and pick up the acoustic emissions without having to go inside." Four transducers are dotted along the engine, giving four channels of data from the engine tests. "We're trying to identify failure modes earlier than can normally be picked up. So far we can see the changes in the acoustic emission signal a couple of hours before the actual vibrations are picked up otherwise. If we can pick them up earlier, we hope that we can do maintenance on the aircraft wing, rather than taking the engine out of the aircraft as happens now. That would reduce turnaround times and cost, and downtime for the airlines."

Adrian has found his maths degree has given him the skills necessary for his work, and many other benefits as well. It has allowed him to work in many fascinating jobs, travel the world, and earn good pay. And all this despite someone once trying to tell him he was not smart enough to do maths. One of the things he says he enjoyed about his degree, and his career in general, has been proving the careers teachers from his school wrong. And he has shown us that if you are interested in a career like his, mathematics can take you there.