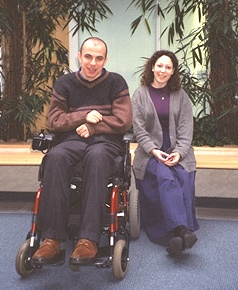 Francesco Mezzadri and Nina Snaith are Ph.D. students in Applied Mathematics at the University of Bristol, and are affiliated with the Basic Research Institute in the Mathematical Sciences (BRIMS) laboratory at Hewlett Packard Laboratories' Bristol campus.

They both have a background in Theoretical Physics, but have found that in their field of Quantum Chaos theory there is a deep overlap between Theoretical Physics and Applied Maths. Their research studies have many potential applications, in particular for making very tiny electronic components which could be used in ever-smaller computers and other electronic gadgets in the future, and so their links with industry are potentially important.

PASS Maths got together with the two of them at BRIMS to talk about where they're from, what they're doing and where they're going.

Both Francesco and Nina did their pre-postgraduate studies overseas. Francesco comes from Parma, in Italy. He went to his local high school in Parma, and then took a Physics degree at the University of Parma. "Maths was always my favourite subject", he says.

Nina is Canadian, and went to high school in Southern Ontario, first in London (Ontario) and then in Hamilton. She took an undergraduate degree in Theoretical Physics at McMaster University in Hamilton. Unlike Francesco, she hasn't had a lifelong love of maths. "It was a bit odd for me, because my father is a mathematician. I actually decided when I was about four that the last thing in the world I wanted to become was a mathematician!" She liked doing the puzzles that her father gave her, but "maths class at school was fairly dull, so I didn't really think there was anything special to mathematics until I went to university and began to enjoy it."

Both of them are now taking Ph.Ds in Applied Maths at Bristol, in a research area known as Quantum Chaos Theory, or Quantum Chaology. To fund this further education, Francesco has a study grant from the European Union, and Nina has a scholarship from Canada.

Students with a good undergraduate degree usually have plenty of options open to them in industry. Why did Francesco and Nina choose to pursue their education further by taking on a Ph.D.? "Because I liked Theoretical Physics!", says Francesco. "It's what I like most to do, and I want to stay in research afterwards."

Nina was inspired by her extra-curricular activities at McMaster. "There was a very good system in Canada whereby students could work with a Professor at the University during the summer. I got to work in various different fields over the four years that I was there, and I just really, really enjoyed doing the Theoretical Physics work, and decided that this was what I wanted to continue doing."

Francesco and Nina both started out in Physics, so why did they end up doing Ph.Ds in Applied Maths? Francesco argues that it's not such an unusual thing to do. "There's no definite border between Theoretical Physics and Mathematics, they almost overlap. My supervisor has a Ph.D. in Physics, but he's in Applied Maths now" he says. "Of course, there are some differences!" he adds.

Nina points out that this is particularly true in the UK. "Applied Maths, especially in England, seems to be a lot more like Physics than it would be, say, in Canada. There are people in Quantum Chaos in Physics departments, and there are some in Applied Maths. It doesn't really make a difference."

It seems that Francesco and Nina might well have ended up doing Ph.Ds in a Theoretical Physics department rather than Applied Maths if they'd gone to another University! Why did they choose to come to Bristol?

"When I finished I wanted to go abroad, and I knew that here in Bristol there was an important group in the same area that I did my dissertation in", says Francesco. Nina has a similar story: "there was one researcher at McMaster who was working in Quantum Chaos - Bristol has a big name in that field, so everyone's heard of them. So when I decided that [Quantum Chaos] was what I wanted to do, the researcher I was working with in Canada suggested to come here."

Both Francesco and Nina are hoping to stay in research once their Ph.Ds are finished. "I wouldn't mind industrial research", says Nina, "but I'd prefer being in a University where you're able to do more or less what research you want." Francesco, on the other hand, is keeping an open mind on the academia versus industry front: "there's time to think about what to do afterwards", he says.

Francesco concurs. "A solid mathematics background is needed in many jobs, many professions, like in the computer industry and economics. In a Ph.D. you acquire a certain ability of problem-solving which is often needed in solving practical problems in a particular situation, even if you're not using the exact mathematical techniques you used in a Ph.D. A Ph.D. opens your mind, gives you quite an elastic mind, so you can easily move to another area of mathematics or elsewhere. You don't have to stay in academia."

In fact, Francesco makes clear that staying in academia is in no way an easy option compared with moving to industry. "It's very competitive. Permanent positions are hard to find, and you usually need to take several years of postdocs [short term post-Doctoral research positions] before finding a permanent job. It's competitive for positions, but if that is what you want to do, it's at least worth trying to do it." 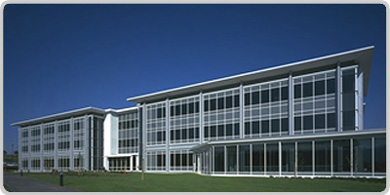 Francesco and Nina are connected to the BRIMS lab via their Ph.D. supervisor, who holds positions both at BRIMS and at the University of Bristol. Nina is based at the University, but comes out to BRIMS for the weekly seminars there. Francesco says he is "more based at BRIMS - half time here, half time at the university." [You can find out more about BRIMS in this issue's feature article about the BRIMS Mathematics and Art Project, or visit the BRIMS website in person.]

The BRIMS connection has benefits for both of them. "Our research group is a minority in the department back at the University. We wouldn't get so many good speakers if it weren't for the connection with BRIMS", says Nina. Francesco agrees. "The BRIMS group is run like a university department, with visiting researchers, regular speakers and so on - it's a very active group". He says that for him there's another benefit to being partly based at BRIMS: "it's much easier to get around in a wheelchair here!"

Quantum Chaology is the study of quantum systems whose classical dynamics are chaotic. The laws of quantum mechanics apply at a very small scale (atomic distances), and in order to describe an electron confined in a very small region, you have to use quantum mechanics. Depending on the shape of the region in which the electron is confined, its classical motion may or may not be chaotic. The study of this model is useful for the construction of mesoscopic devices which HP is interested in to produce small electronic devices.

Mesoscopic systems are systems that are not as small as a single atom, but small enough that properties can be very different from those in a larger block of material.

Francesco and Nina are both living in Bristol, far from their home countries. Are they happy about their decision to study overseas?

"I'd do it again", says Francesco. Some of his reasons are professional: "there are more opportunities here than in Italy." He's also found that "there's a different approach here to teaching and research, and to students. This has some advantages, some disadvantages. It's good to try it, to see what is good and what isn't." Francesco says there are personal benefits to studying overseas as well, in that "it's always useful to see what different people, and institutions, and cultures are like. It's an enriching experience."

Nina has also found things very different in the UK. "I didn't realise there could be such a difference in attitude before coming here!" This isn't all good - she says she finds it "much more stressful and competitive over here" than it was in Canada. "There's more pressure to keep doing really good research. I'm really glad to have tried different places though", she adds, "or I would have thought everywhere was the same."

So, if you're a student interested in maths and physics, and even perhaps thinking about doing a Ph.D. one day, what do Francesco and Nina recommend?

"If you're keen on maths and physics, choose a maths or physics degree and see how you go. It's difficult at 16 or 17 to have clear ideas of what you want to do. Employers want people with those degrees, so you can always change your mind about the Ph.D. Do what you want to do; do what you really like!"

Many thanks to Florian Kammüller for his assistance with the visit to Bristol.