Careers with maths: a set of three posters from Plus

Back in 2004, we produced a set of posters about careers in maths, with the support of the Engineering and Physical Sciences Research council. The posters were phenomenally popular. Copies were initially sent to the maths departments of most secondary schools in the UK, and continued to be requested by students, teachers and other Plus readers over the years, both from the UK and overseas. Unfortunately we have run out of printed stocks but you can still download and print them yourself. (Click here for more information about how to get your own copy of the all our other posters.)

Maths opens doors to a variety of exciting careers 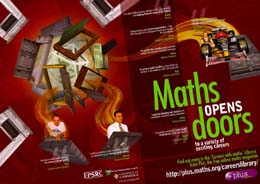 We have interviewed a lot of people who have studied maths. Over and over again, interviewees tell us that while they were in school they had no real idea what sort of jobs a degree in a mathematical discipline might lead to. Here are some of the people we've met who use maths in their work:

One of these has a PhD in maths; one had to struggle to get a D at A level. But what they all have in common is that they found their maths education a great help as they progressed up the career ladder.

Maths for skills that you can use in any career 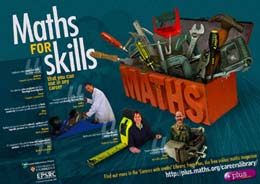 There is a big difference between the actual career usefulness of mathematics, and the perceived career usefulness of mathematics. However, according to a survey by the Engineering and Technology Board, maths and computing graduates are the most employable and the very highest earners, and mathematical skills regularly top employers' wishlists. So even if the perception is that maths is a dry, rather abstract subject, the fact is that there are working mathematicians everywhere - they just tend to be called things like "defence analyst" or "actuary".

Maths makes a difference to your future career 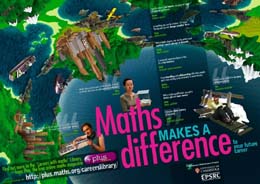 As well as the most obvious mathematical careers, there are many other interesting career paths that involve studying mathematics or a related subject and going on to work in a job where mathematics plays a substantial role. There are also many jobs that need a basic level of mathematical ability and confidence, and in practically every job, success and promotion come more easily to the mathematically able.