This video, aimed at students aged 16+, opens with Professor Chris Budd holding the plastic yellow duck he is entering in the Annual Bath Plastic Duck Race. Competition is stiff - there are over 3,000 contestants - but how can we predict who will win? Very few competitors have form, and it's hard to tell much about their training regimens... so is the outcome totally unpredictable?

Later on, after hearing about the history of the attempts of scientists to predict nature, we return to the race, to see the flotilla of plastic ducks hit the Bath Weir - and then all bets are off. The competitors have entered an area of turbulence, and we can only hope that the best duck wins. 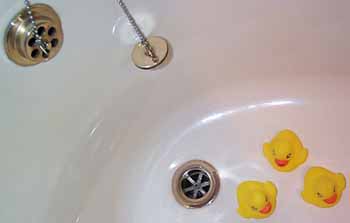 This event typifies chaos, which occurs when, in spite of simple governing equations, a system exhibits complex nonrepeating unpredictable behaviour. A better-known example than the Turbulent Duck Race is the double pendulum - two pendula linked via a joint like a knee that can bend both ways. This system has three distinct movements - the first is simple periodic behaviour, and looks rather like a normal pendulum, with both segments swinging in time, the second is complex periodic behaviour, where the pendula swing in opposite directions, and the third is chaotic, where the motion cannot be predicted.

Most of the video shows Professor Budd speaking to a group of students at Cotham School in Bristol - incidentally, the school where the famous physicist Paul Dirac studied in his youth. With a nice sense of humour and plenty of props, he takes his audience - real and virtual - on a journey to the paradox at the heart of chaos - the unpredictability of simple deterministic systems. A clear introduction to a fascinating topic, this video closes with a provocative prediction (defying the unpredictability of the subject matter) that "Chaos is the science of the 21st century".

Better have our rubber ducks to the ready, then!