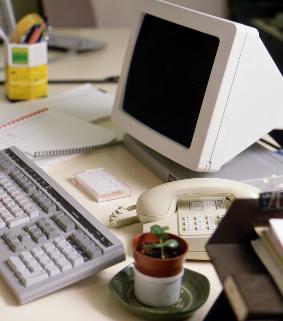 How would you like to be responsible for one of the greatest scientific breakthroughs of our time? To detect extraterrestrial intelligence, to analyse data from the Human Genome project or to discover the largest prime number known to humanity? Well, you can, just by sitting back and watching your screen saver as you donate your home computer's spare processor power to your chosen scientific charity.

Distributed computing is a method for tapping into the enormous resource of unused time on home computers. All that is required is that the problem in question can be diced up into small tasks and run independently on home computers, and that the results can be combined together at a later date. Those participating usually download some software, such as a screensaver, from the project's website. Then, whenever your computer is sitting idle while you answer the phone or make that cup of tea, the software will download data, analyse it and return the results.

A growing number of research groups are relying on the charity of home computer owners to churn through the complex calculations necessary to solve today's scientific questions. Although it may not be as prestigious as owning a supercomputer, tapping into the 300 million or so home computers linked to the internet offers resources researchers could previously only dream about. 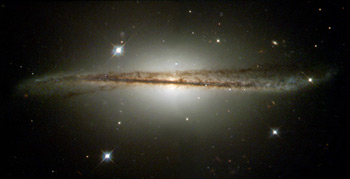 Is there anybody out there? (Image courtesy of NASA)

One of the most famous of these "@home" projects, SETI@home, uses idle CPU time to search for extraterrestrial messages in the data from radio telescopes. SETI@home's screensaver analyses 107-second long pieces of recorded data using fast Fourier transforms. The aim is to detect peaks in signals at specific frequencies which might indicate aliens trying to talk to us. After just three years, SETI@home is about to clock up an impressive 1 million years of computing time.

And although SETI hasn't as yet detected any alien greetings, the people @home have already made a number of breakthroughs possible. Recently GIMPS, the Great Internet Mersenne Prime Search, discovered the largest known prime number which was more than 4 million digits long (see the story from Issue 19 of Plus). One of the earliest projects, distributed.net, succeeded in cracking a 56 bit DES encryption using the brute force of distributed computing. distributed.net are also using the worldwide supply of spare computing time to look for Optimal Golomb Rulers - mathematical objects like rulers such that all the pairs of marks are separated by different distances. Optimal Golomb Rulers are exponentially harder to find the longer they are, but have important uses in cryptography, X-ray crystallography and radio astronomy.

But the requirement that the problem can be broken up into pieces sufficiently small to be analysed independently has so far limited the types of projects running @home. However, as computationally intensive calculations become more common and research budgets decrease, more and more researchers are trying to rephrase their problems in such a way that they can be attacked using a distributed network.

Recently, Folding@home used sophisticated statistical techniques to break up the problem of protein folding - not an obvious candidate for the distributed technique. Using this volunteer network, the group have set a new record by simulating 38 microseconds of the folding of a simple protein. The previous record - a mere one microsecond - took many months on a Cray supercomputer.

So it is now possible for you to take part in the next great scientific advances, by simply donating your computer's idle moments to your chosen scientific cause.