'Coincidences, chaos, and all that math jazz' 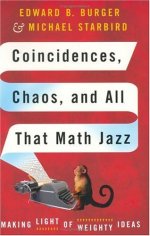 Coincidences, chaos, and all that math jazz: making light of weighty ideas

By Edward B. Burger and Michael Starbird

Edward Burger and Michael Starbird are both Professors of mathematics and have won numerous teaching and writing awards for their work. Burger has even performed stand-up comedy in night-clubs and is no stranger to appearing on television and radio broadcasts. In their company the reader is clearly in safe hands and these achievements are reflected in the quality of the book. The text is also written with a charm that is lamentably rare in maths literature.

...All That Math Jazz is a very wide-ranging book, sweeping from probability and chaos theory through to topology and notions of infinity. Sure enough, the book does contain a lot of the standard fare of popular maths writing that many Plus readers may already be familiar with. Burger and Starbird explain the chances of people in crowds sharing birthdays, the implications of butterflies flapping their wings, how prime numbers are used in cryptography and code-breaking, and the network of handshakes in the world that leads to the idea of six degrees of separation between you and any other person alive. But these slightly hackneyed topics can be quickly skimmed through and the book soon moves into new territory, showing how mathematics can be used to answer the truly profound questions of modern life. Such as how if you have sufficiently-stretchy pants you could take them off without first removing your trousers. Other insights into everyday life include the mathematics of email scams and how to improve your odds of winning the next heads-or-tails flip. The section on chaos even describes a maths experiment you can try out using two calculators, showing how exactly the same series of calculations can produce wildly different answers and without either of the calculators malfunctioning. Later in the book the authors describe a very simple experiment of folding a strip of paper that, if you were able to keep going long enough, would eventually produce a famous fractal image known as the Dragon Curve.

But in my opinion the best part of the whole text, and the reason I have already been recommending it to friends, is two chapters nestled in the middle. Burger and Starbird lead us effortlessly through the realm of spirals that appear everywhere in nature, and explain how these curves are related to a number pattern known as the Fibonacci sequence, and how this itself links into objects known to the ancient Greeks as the Golden Rectangle and Golden Ratio. This area of maths neatly ties together the natural world around us with classical geometry and even fine art and architecture. It is for this last reason that the Golden Rectangle has received a great amount of public interest recently, not least due to a certain novel by Dan Brown, and an equal amount of confusion about the actual mathematical links between the different manifestations of the Golden Ratio. ...All That Math Jazz contains by far the clearest explanation I've come across so far and carefully leads the reader step-by-step along the whole chain of argument.

After this, the authors march bravely into the even headier realm of the concept of infinity. But the book once again shines, and the text elegantly talks us through a way of simply imagining infinity using the charming metaphor of guests staying at the "Infinity Inn". For example, what do you get if you add one to infinity? How about infinity plus infinity? Despite them being completely alien to the everyday world we are used to, the book shows you how to handle these ideas, and by the end of the chapter even prove yourself why there must be an infinite number of different infinities, each larger than the previous. Truly mind-blowing stuff, but again extremely well explained so you don't end up with too much of a headache!

Overall, the book is a very good account of a wide selection of different aspects of mathematics. This does unfortunately result in some sections seeming frustratingly superficial without enough to really sink your teeth into, but as an introduction to a great range of fields it serves very well. The text is also handsomely accompanied by almost two hundred illustrations and diagrams, all beautifully hand-drawn. Most of these serve very well to support the text, and in the case of explaining the removal of stretchy underpants could perhaps even safeguard against horrific injury, but others only act to clutter the page. When talking about dimensions, for example, the authors thoughtfully provide a diagram showing a single point. And then helpfully repeat it again just a few pages later, perhaps in case you'd already forgotten exactly what a dot looks like. My only other gripe is that, although engaging at first, the particular brand of informal writing and "witticisms" scattered liberally through the text does become quite grating, and the less said about some of the truly awful puns the better. Having said that though, the chapters on the Golden Ratio and Infinity are by themselves well worth the cover price and more than make up for any short-fallings of the rest of the text.

Lewis Dartnell read Biological Sciences at Queen's College, Oxford. He is now on a four-year combined MRes-PhD program in Modelling Biological Complexity at University College London's Centre for multidisciplinary science, CoMPLEX. He is in the second year of his PhD research in the field of astrobiology, writing computer models of the space radiation striking Mars to predict whether alien life could possibly be surviving near the surface.

In 2003 he came second in the THES/OUP science writing competition, and in 2004 was awarded second prize in the Daily Telegraph/BASF Young Science Writer Awards.