Daniel Bernoulli and the making of the fluid equation

Daniel Bernoulli, born in 1700, came from a long line of mathematicians. His father Johann was head of mathematics at Groningen University in the Netherlands. The family was prone to bitter rivalry: something he was to suffer when he became estranged from his father some 30 years later.

At the age of five, the Bernoulli family returned home to Basel in Switzerland, so that Johann's wife could be with her ailing father. Some years earlier Johann had applied to become professor of mathematics at Basel University, but this was denied him because his elder brother, Jakob had deliberately schemed to prevent him getting the post. Later Jakob got the professorship. En route to Basel, Johann learned that Jakob had just died of tuberculosis. He later recalled rather shamelessly that " ... I could succeed to my brother's position." He set about lobbying for the vacant position and in less than two months he got his way.

Johann tried to map out Daniel's life, selected a wife for him and decided he should be a merchant. Strangely enough, his own father had tried a similar strategy but Johann had resisted - so did Daniel. However, Daniel spent considerable time with his father and learned much about the secrets of the Calculus which Johann had exploited to gain his fame. By the time Daniel was 13, Johann was reconciled to the fact that his son would never be a merchant but absolutely refused to allow him to take up mathematics as a profession as there was little or no money in it. He decreed that Daniel would become a doctor. For the next few years Daniel studied medicine but never gave up his mathematics.

In time it became apparent that Daniel's interest in Mathematics was no passing fancy, so his father relented and tutored him. Among the many topics they talked about, one was to have a substantial influence on Daniel's future discoveries. It was called the "Law of Vis Viva Conservation" which today we know as the "Law of Conservation of Energy". The young Bernoulli found a kindred spirit in the English physician William Harvey who wrote in his book On the Movement of Heat and Blood in Animals that the heart was like a pump which forced blood to flow like a fluid through our arteries. Daniel was attracted to Harvey's work because it combined his two loves of mathematics and fluids whilst earning the medical degree his father expected of him.

After completing his medical studies at the age of 21, he sought an academic position so that he could further investigate the basic rules by which fluids move; something which had eluded his father and even the great Isaac Newton. (Johann Bernoulli never credited Newton with his discoveries in connection with the Calculus, instead giving the credit almost entirely to Leibnitz; another source of rivalry in the early eighteenth century.) Daniel applied for two chairs at Basel in anatomy and botany. These posts were awarded by lot, and unfortunately for Daniel, he lost out both times.

By the age of 23, Daniel was in Padua, Italy. Whilst recovering from illness he designed a ship's hour glass which would produce a reliable trickle of sand even in stormy weather. He submitted his design to the French Academy and took first prize. Meanwhile a friend, Christian Goldbach, arranged for some of Daniel's other work to be published under the title Some Mathematical Exercises.

When he was 25, Daniel returned home to Basel to find a letter from Empress Catherine I of Russia awaiting him, inviting him to become professor of mathematics at the Imperial Academy in St. Petersburg. At first Daniel was not keen to travel to such a distant land, but his elder brother Nikolas offered to go with him. Catherine was so keen to secure Daniel that she agreed to offer a second chair to Nikolas! Unfortunately, Nikolas died of tuberculosis a year later. At first Daniel thought of returning home but stayed when his father suggested that one of his own students, a certain Leonard Euler would make an able assistant for Daniel in his research.

Together Bernoulli and Euler tried to discover more about the flow of fluids. In particular, they wanted to know about the relationship between the speed at which blood flows and its pressure. To investigate this, Daniel experimented by puncturing the wall of a pipe with a small open ended straw and noted that the height to which the fluid rose up the straw was related to fluid's pressure in the pipe.

Soon physicians all over Europe were measuring patients blood pressure by sticking point-ended glass tubes directly into their arteries. It was not until about 170 years later, in 1896 that an Italian doctor discovered a less painful method which is still in use today. However, Bernoulli's method of measuring pressure is still used today in modern aircraft to measure the speed of the air passing the plane; that is its air speed.

Taking his discoveries further, Daniel Bernoulli now returned to his earlier work on Conservation of Energy. It was known that a moving body exchanges its kinetic energy for potential energy when it gains height. Daniel realised that in a similar way, a moving fluid exchanges its kinetic energy for pressure. Mathematically this law is now written:

where p is pressure, rho is the density of the fluid and u is its velocity. A consequence of this law is that if the velocity increases then the pressure falls. This is exploited by the wing of an aeroplane which is designed to create an area of fast flowing air above its surface. The pressure of this area is lower and so the wing is sucked upwards.

By the age of 30 Daniel's father had just been awarded a prize by the French Academy. Daniel himself had almost completed his treatise Hydrodynamica and longed to return to Basel. Despite numerous attempts Daniel repeatedly lost out in ballots for academic positions in Basel but two years later he finally succeeded. He returned home in 1734 to discover that he and his father had been jointly awarded another prize by the French Academy of Sciences. His father became angry and was unhappy to admit that his son was at least his equal, as a result Daniel was banned from his father's house.

It took Daniel a further 3 years to complete his work on fluids. Daniel put in the frontispiece "Hydrodynamica, by Daniel Bernoulli, Son of Johann". It is thought that he identified himself in this humble fashion as an attempt to mend the feud between himself and his father. But a year later his father published his own work called Hydraulics which appeared to have a lot in common with that of his son and the talk was of blatant plagiarism. To some extent Daniel Bernoulli lost much of his drive in mathematics after these events and turned more to medicine and physiology. He remained in Basel and died there on March 17th, 1782 at the age of 82. 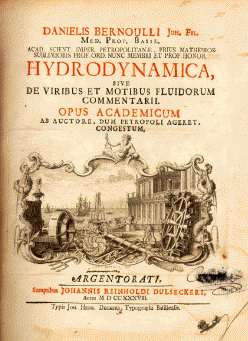