This issue's Plus chat topics

These are busy times for Plus. Apart from celebrating our 50th issue by putting together a bumper collection of in-depth articles, news and reviews, we're also working on various special projects, some of which have already gone live, and some of which will reach you over the next few weeks and months. Here's a sneak preview of what's in store for 2009...

Plus and the stars 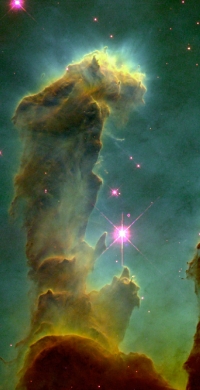 To celebrate the International Year of Astronomy 2009, and with the support of the Royal Astronomical Society, we have launched a project called Seven things everyone wants to know about the Universe. It's a series of seven online polls, one of which has already taken place, giving you the chance to find answers to your most burning questions about the Universe. We'll put your favourite questions to world leading experts in the field, including renowned author and cosmologist John D. Barrow, Astronomer Royal Martin Rees and leading theoretical physicist Kip Thorne. The first poll has now closed, and your favourite question turned out to be: "What happened before the Big Bang?" We've already talked to the expert and you can expect an answer, as well as the second poll, here on Plus very soon.

Do you know what's good for you?

If the stars are too far out for you, then here's something more down to Earth. With support from the Wellcome Trust, we'll be exploring the statistics and mathematical models underlying the biomedical sciences. This includes investigating how medical care decisions are made and the statistics that are all too often dressed up as health scares or miracle cures. Next month we will launch a "rapid response" news desk, which will pick apart the figures behind issues that come up in the media. In addition to material responding to the news, we will run in-depth articles on other mathematical aspects of health and medicine, which will be published later in the year. Although the project hasn't been officially launched yet, you can get a taste of the kind of material that's likely to come up in this issue's Understanding Uncertainty column and some recent news stories.

The language of physics

Throughout the history of science, there has been rampant cross-fertilisation between maths and physics, with maths providing a language for physicists to speak in and solving many of their problems, and physics providing the inspiration for new and exciting mathematical problems. We will be celebrating the special relationship between maths and physics with a special issue, supported by the STFC and due to be published in June this year, devoted entirely to the questions and problems that drive modern physics. We won't yet give away exactly what we will cover, but you can be sure that it will be exciting, and we've got some of the best people in the area writing the articles.

Finally, you still have a chance to enter the Plus new writers award 2009, the maths writing competition that gives you a chance to share your favourite bit of maths with the rest of the world. There are separate categories for school students, university students and the general public, and prizes include publication in Plus, iPods, as well signed copies of some of the best popular science authors around. If you need some inspiration, have a look at the winners from the 2008 competition and the 2006 competition. The competition closes on the 31st of March 2009, so get writing quick!

That's all we can reveal at the moment, but stay tuned for news of other exciting projects from the world of maths. The easiest way to keep your eye on Plus is to subscribe to our regular e-newsletter to have Plus news delivered straight to your inbox or point your news reader to our RSS feed.

Support Plus — make a difference to mathematics

Were you aware that Plus is entirely funded by grants and donations? It is the generosity of our sponsors, individuals and organisations committed to the public understanding of mathematics, that enables us to bring you new stories from the fascinating world of maths every week, and to keep Plus free of charge for all our readers.

Unfortunately, our current core funding runs out at the end of March 2009, and that's why we recently launched a fundraising campaign to sustain the future of Plus. If you enjoy Plus, then please consider making a donation via our parent organisation, the Millennium Mathematics Project, based at the University of Cambridge. Your money will go towards the salaries of our editorial team and the technical staff who maintain the Plus website.

We're committed to keeping Plus as it is: interesting, intelligent, fun and free, and one of the only regular popular maths publications on the Web. Every donation, no matter how small, will help us to achieve this aim and make a difference to mathematics as a whole.

Thank you for your support!