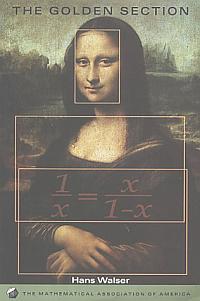 The golden section (or golden ratio), famously, was used in antiquity, when the ancient Greeks built temples the proportions of whose parts - by accident or design - are often supposed to have fallen in the golden ratio. In this little book, Hans Walser is concerned with the mathematical properties of self-similarity which presumably give this particular ratio its aesthetic appeal. It therefore fills a gap felt by those who have read about the number's supposed mystical properties but would like a more solid introduction to its mathematical ones. The maths is reasonably brisk, so the book will mainly appeal to readers who have, or are studying, maths at A-level, or at least are not afraid of plenty of equations.

The book is divided into chapters on various areas (all more or less geometrical, with the exception of one on Number Sequences) where the golden section has hoisted its standard. It is a good mixture of exposition, questions to keep the reader alert, and pretty diagrams, which of course the subject invites. For example there is a chapter on fractals based on the golden section, and another on solid geometry. A pleasant feature is the frequent references back to earlier chapters, showing how different areas of mathematics interconnect.

I have only one small complaint to record, and it concerns the production rather than the contents: the glossy cover is inclined to curl back in a peculiarly distressing way. (Yes, all paperbacks do this to an extent - but not to this extent.) If you can overlook that, this is a stimulating and diverting book.