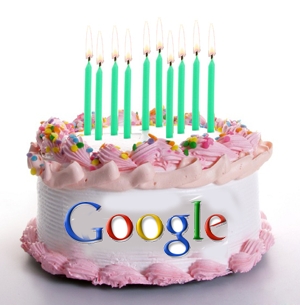 As the web search engine Google celebrates its 10th birthday, it is hard to imagine life online without it. It has become such an indispensable tool that we don't just search for something any more, we "google" it, as recognised by the Oxford English Dictionary in 2006. What many people don't realise is that Google's rise to become one of the most successful search engines on the web today is due to the mathematical algorithm PageRank, devised by Sergey Brin and Lawrence Page, the founders of Google. This algorithm not only decides which webpages match your search criteria (which all search engines do), but also which are more important and returns these at the top of the results.

PageRank decides how important a page is by staging a popularity contest with each page on the web voting for all the other pages it links to. The algorithm constructs a huge matrix with a column representing each web page. The entries of the column corresponding to a page P indicate which other pages P links to. The page P passes on a proportion of its own importance to those pages it links to, and its own importance is calculated by adding up all the contributions made by the other pages linking to it. This all sounds pretty circular, but in fact calculating this importance vector is relatively straight-forward using linear algebra techniques, despite the fact that the matrix involved has over 25 billion rows and columns. (You can read more in The amazing librarian, a runner-up in the Plus new writers award 2008.)

The maths behind Google highlights the relevance of maths in our daily lives and shows the vital role it has to play in industries, especially the information sector. But it must also be the most lucrative piece of maths in history, as this mathematical advance is directly responsible for much of Google's success and so the company's $4 billion dollar profit in 2007.

But what do you give the organisation that has everything (well, the whole web anyway)? What Google wants for its birthday are ideas that can change the world by helping as many people as possible. They have launched [now defunct] Project 10100, and are asking everyone to submit their life-changing ideas by 20 October 2008, and they will put the best 100 ideas up for public vote. The vote will determine the 20 finalists, and 5 of these will be chosen to share the $10 million funding that Google hopes will make these ideas happen.

So, not only has maths changes our lives by opening up the world wide web through Google's algorithm, the money this maths has made Google might just make the world a better place too.