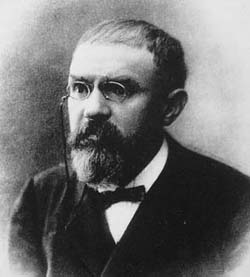 Henri Poincaré died 100 years ago today. He is most famous for the conjecture (now theorem) which carries his name and which remained open for almost 100 years, until Grigori Perelman announced a proof in 2003. But the conjecture isn't all there was to Poincaré. One of his teachers reportedly described him as a "monster of maths" who, perhaps because of his poor eyesight, developed immense powers of visualisation, which must have helped him particularly in his work on geometry and topology. He has been hailed one of the last people whose understanding of maths was truly universal. And he also thought about the philosophy of mathematics. He believed that intuition has an important role to play in maths, and anticipated the work of Kurt Gödel, who proved that maths cannot ever be completely formalised. Finally, and extremely pleasingly for us here at Plus, Poincaré was one of the few scientists of his time to share his knowledge by writing numerous popular science articles.

You can find out more about the Poincaré conjecture and related maths in these Plus articles:

And there is more on Poincaré's life and work on the MacTutor history of maths archive.