New research has shown that history can go a long way in teaching maths to teenagers. Iris van Gulik, a researcher at the University of Groningen in the Netherlands, has developed methods to teach mathematical theories through their historical development, and has found that this can lead to deeper understanding, more motivated students and a livelier learning process. 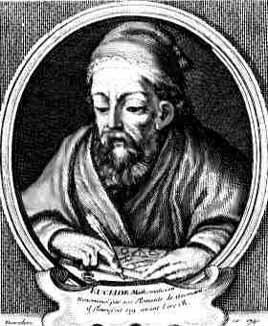 Van Gulik got teachers to test her methods on students from two different age groups. Firstly, 13 to 15-year-olds were introduced to geometry by studying 17th century Dutch surveying. The second age group consisted of 16 to 18-year olds who were taught proofs from planar geometry through the history of non-Euclidean geometry. It was the latter experiment that proved the most successful: students came away with a better understanding and highly motivated, and teachers found the subject "challenging and inspiring".

The development of non-Euclidean geometries is arguably one of the most fascinating in mathematical history (see Plus articles The origins of proof and Mathematical mysteries: strange geometries). It started out with Euclid of Alexandria (ca. 326BC - 265BC), the first person who attempted to construct a complete formal mathematical system. The basis of this system were five axioms — self evident truths that need no further justification. Over the years, mathematicians noticed that the fifth axiom, also known as the parallel axiom, was quite a lot more complicated than the other four, and decided that it should be possible to derive it directly from the others. The race to do this lasted centuries, and one mathematician who joined it was the Italian Giovanni Gerolamo Saccheri (1667 - 1733). His idea was to use a proof by contradiction: show that any geometry that satisfies the first four but not the fifth axiom can be reduced to a heap of self-contradictory nonsense. In his attempt to do just that, Saccheri unintentionally invented what is today known as hyperbolic geometry: the very results he hoped would lead to the desired contradiction actually form its basis.

Although Saccheri never accepted hyperbolic geometry, it took little over a hundred years for it to become established, along with elliptic geometry, another theory he had dismissed. Today non-Euclidean geometries are taught as a standard part of any university degree and — more importantly — are used to describe the shape of our universe.

Van Gulik's tests involving the younger age groups proved slightly less successful than the one just described. Efforts were partly hampered by the fact that students had to read documents written in old Dutch, which required collaboration between the maths and Dutch departments of schools. Students did not come away with a better understanding of the subject matter, however the integration of history was still received positively.

The idea of teaching mathematical concepts by studying their historical development is not new, in fact it has been used in one form or another since the beginning of the 20th century. Most maths teachers probably know from their own experience that an interesting historical episode adds a little spice to a subject that can otherwise seem abstract and lifeless. Moreover, it seems likely that the concepts which caused the original mathematicians to get stuck are precisely those over which subsequent students stumble. But while most people agree that historical resources should be included in teaching material, it still is not clear to what extent this should happen and how exactly the resources should be used. Research like Van Gulik's sheds light on the matter and can help to devise a detailed teaching strategy.