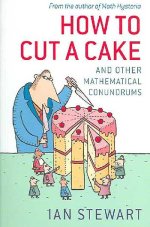 How to cut a cake and other mathematical conundrums

How to cut a cake is the latest volume holding reprinted articles from Stewart's regular maths column in Scientific American between 1987 and 2001. Stewart is one of the finest popular maths writers out there, and he does not disappoint with this latest offering. The book is a smorgasbord of tasty morsels, each piece no more than a few pages long and a delightful description of a particular puzzle in mathematics — perfect to dip into on a bus journey.

The eponymous piece expands on the well-known cake-cutting problem of ensuring that all diners are satisfied with the fairness of their slice — how can you adapt the "I cut, you choose" algorithm for more people? Other highlights include a discussion on the most efficient way of lacing up your shoes, never-ending chess games, and how magicians exploit the mathematical patterns of supposedly random shuffling. My personal favourite is the account of Quod, a new mathematical board game invented by a computer scientist called Keith Still. As with all the best games, the rules are childishly simple to explain, but the tactics necessary to beat your opponent become devilishly difficult.

The subjects range from explanations of everyday events, such as why the phone cord always seems to tangle itself, to the cutting-edge of on-line security and information encryption. But by far the most interesting aspects of Stewart's maths writing are the astounding links he illustrates between seemingly unconnected topics. For example, we see how colouring maps to ensure no similarly-shaded territories share a border provides insight into testing printed circuit boards for shorts. Another well-told story of intertwining threads involves a curious curve that crosses itself at every point, the well-known Pascal's triangle, and the Tower of Hanoi game.

Every article is followed by a short section on the feedback Stewart received after the original publication of the article, quite often containing important insights to a particular problem provided by "amateur mathematicians".