'How to score: science and the beautiful game' 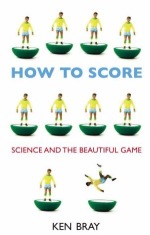 How to score: science and the beautiful game

Do you love football, marvel at Beckham's perfect swerving free kicks and find formations fascinating? Or do you love science, and want to find out how aerodynamics affects a ball in flight and discover the insights statistical analysis of real-life data can give? Then you will enjoy Ken Bray's book How to score: science and the beautiful game.

This book is very accessible to both sport lovers and science lovers. The science is explained in clear conversational style, and always illustrated and motivated by examples of real-life games played by real players. For example, the aerodynamics of a spinning object is set firmly in context, explaining the swerving free kick invented by the Brazilian midfielder Waldire Pereira in the 1950s and still used today by players such as Zidane and Beckham. In fact, Bray analyses and compares the techniques of these and other players, illustrating them with easily understood diagrams, and of course photos of the real thing.

And for those of us not wise in the ways of the beautiful game, the intricacies of football are revealed to be fascinating in themselves. Bray clearly conveys his enthusiasm for the game. He presents its historical development: apparently it has been played for centuries and "defied royal injunctions, Puritan censure and municipal disfavour, and has shrugged its shoulders at considerable blood-shed, injury and even fatalities" — I don't think I'll be saying "it's just a game" again! He takes you on a fascinating tour of all the aspects of football — formations, individual technique and set pieces — all the while using science to reveal the "hidden rules" of the game.

As well as giving a history of the game, the book also goes through the development of sport science itself and the new insights it brought to science in general and, once accepted, to the sport too. It covers everything from the first mathematical models of ball flight to physics, maths, biology, physiology, biomechanics, computer science and psychology, all of which make up sport science today. There is even a World Congress on Science and Football held every four years.

One highlight of the book for me was the detailed discussion of the aerodynamics of the swerving free kick, that allows players to curve the ball through the air like magic. Bray also made clear just how skilled the players are in creating just the right conditions for this to happen, a result of hours and hours of practise until they can kick the ball in precisely the right spot in precisely the right way. (You can read more about the aerodynamics of ball flight in the article If you can't bend it, model it! in this issue of Plus.)

Another highlight was the chapter on the psychology of the game. I found the discussion of the minutiae of players' behaviour on the pitch particularly fascinating. Liverpool goalkeeper Dudeck may have looked like he was just handing the ball over to an opposing player about to take a penalty during a European cup final, but really he was stamping his ownership and control of the game all over it. The chapter gives some insight into the exotic behaviour we see on, and sometimes off, the football pitch.

This book is a good read, well illustrated and covers two topics many feel passionate about: football and science. If you are a fan of either of these you'll enjoy this book, and if you are a fan of both you will love it.

Rachel Thomas is Co-editor of Plus.