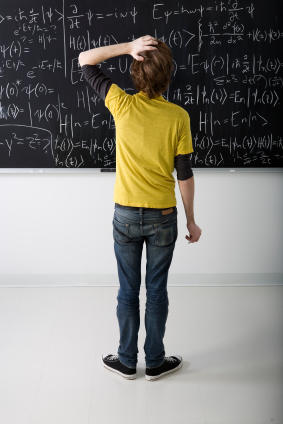 Despite what is commonly thought, real-world examples may not help students learn.

It is a common belief among teachers and parents that when teaching mathematical concepts, the best way to illustrate them is with "real-world" examples. However, researchers at Ohio State University's Center for Cognitive Science have found the exact opposite — that college students taught a new mathematical concept with real-world, concrete examples were not able to use their knowledge in new situations.

The work, led by Jennifer Kaminski and published in the journal Science, found that, contrary to popular belief, it was students taught with abstract symbols, not concrete examples, who were more likely to successfully apply their knowledge.

"These findings cast doubt on a long-standing belief in education," said Vladimir Sloutsky, co-author of the study. "The belief in using concrete examples is very deeply ingrained, and hasn't been questioned or tested."

The researchers examined how well college students learned basic mathematical concepts such as commutativity and associativity — that is, that 2+3 is equal to 3+2. Some were taught using generic symbols, so that combinations of symbols gave a predictable resulting symbol. Others were taught using concrete examples, such as combining various amounts of water in measuring cups and counting the number of tennis balls in a container.

After the students had been taught using these various means, they undertook a multiple-choice quiz. It was found that most of the students picked up the knowledge easily, however when it came to applying the principles involved to a completely new situation, those that had learnt through the use of abstract symbols did much better. The new situation used in the experiment was described to the students as a foreign children's game whose rules followed on from the newly learnt mathematical concepts. A following quiz found that whilst those who learned through the use of generic symbols got nearly 80 percent of the questions correct, those who learned through the use of concrete examples did no better than chance.

In another experiment, the researchers asked students taught using two concrete examples to compare the examples and note their similarities. The following quiz on the children's game found that there was some increase in performance, but not to the level of those taught by abstract symbols. The researchers suggest that only some students benefit from comparisons of learned real-life examples.

A final experiment involved students who were taught by concrete examples initially, and then symbolically. But even in this experiment the students who learned only by symbols with no real-world applications performed better. The researchers think that the superfluous information behind the real-world examples may have clouded the maths behind it.

"We really need to strip these concepts down to very symbolic representations such as variables and numbers. Then students are better prepared to apply those concepts in a variety of situations," said Kaminski.

The researchers hope that their work will generate debate regarding the most effective methods of teaching mathematics.