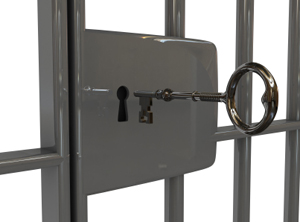 A cell will remain unlocked in the morning if it has been visited by an odd number of prison officers during the night. Let's look at a particular cell

. It will be visited by an officer for every number

is not a square number, then each such pair is made up of distinct numbers. So, if

is not a square number, then cell

is visited an even number of times and therefore ends up locked. If

is a square number, then the cell is visited an odd number of times and remains unlocked in the end. There are 10 square numbers up to and including 100, so the answer is 10.

This puzzle was contributed by John Rowland, an IT officer who also provides maths tuition, preparing students for examinations at GCSE and A level.

Back to original puzzle