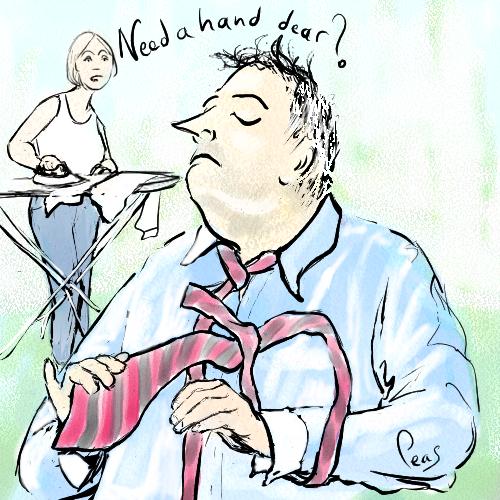 Who says that academics don't have a sense of style? Two researchers from the University of Cambridge's Department of Physics have brought a whole new sartorial dimension to the daily ritual of putting on a tie.

In a burst of light relief from their normal domains of protein folding, polymers and colloids, Dr. Thomas Fink and Dr. Yong Mao have used a statistical technique known as "random walk theory" to explore just how many ways there are to tie a tie.

Presently there are only four ways that ties are traditionally knotted: the Four-in-Hand, the Windsor, the Half-Windsor and the Pratt. The Pratt is a recent innovation, being introduced to the world on the cover of the New York Times in 1989. "We were surprised that only one new knot had been revealed in the last 50 years and thought we would try our hand at it," says Thomas Fink.

The random walk theory was originally developed to look at the movement of gas molecules, and describes movement which, although unpredictable, is not totally random. Similarly, the combination of moves required to successfully knot a tie cannot be completely random either: as Yong Mao explains, "If the end of the tie is moved to the right for instance, its next move cannot be to the right again - it has to be either to the left or to the centre. That means that each move made in tying a tie can only be followed by one of two alternatives."

So, are these physicists with a flair for fashion hoping to revolutionise the well-dressed chap's daily grooming with their innovation? "All these things are in practice a matter of taste", says Thomas Fink. "We leave it to others to make sartorial judgements."

Knot theory has more applications than simply working out how to tie your tie or moor a boat with a sailor's knot, of course! It is a branch of mathematics with a long and illustrious history. It was first invented in the late 19th century and popularised by Lord Kelvin (famous for the Kelvin scale of temperature as well as many discoveries in different branches of science). But knot theory really took off this century when DNA was discovered in 1953 and found to have a double helix shape. Often DNA gets knotted up, and knot theory can describe the different sorts of knots it gets into. Nowadays its applications range into chemistry, molecular biology, particle physics and research into the so-called "Theory of Everything"!