Nestled among the olive trees, on the hillside of a remote mountain town in Turkey, you will find a mathematical paradise. That is how visiting mathematicians describe Ali Nesin's Mathematics Village, enchanted by both the physical location, and the philosophy it embodies. 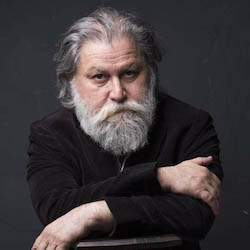 Nesin will be presented with the Leelavati Prize at the closing ceremony of the International Congress of Mathematicians in Rio de Janeiro tomorrow, and will give his Prize lecture this evening. The award recognises Nesin's "outstanding contributions towards increasing public awareness of mathematics in Turkey, especially because of his tireless work in creating and developing the 'Mathematics Village' as an exceptional, peaceful place for education, research and the exploration of mathematics for a wide range of people."

When Nesin's father, the renowned writer Aziz Nesin, died in 1995, Nesin returned to his homeland of Turkey. He had been pursuing his career as a research mathematician overseas in France and the USA, but returned home to work as the director of the Nesin Foundation, a non-profit institution devoted to providing educational opportunities for children who did not have them. He also became head of the mathematics department at Istanbul Bilgi University, working to create a department that would be on the same level as international institutions such as the Universities of Oxford and Cambridge.

But Nesin soon realised that the students arriving at the university were not ready for such an education. They had left highschool with gaps in their knowledge, and most importantly they had not had the opportunity to be mathematically creative. Nesin believes that everyone has roughly the same ability to do maths, but many students struggle because they are afraid – afraid of giving the wrong answer, looking stupid, getting a bad test result.

After running a series of summer workshops to address this, Nesin began to dream of something better. The Mathematical Village was launched in 2007 when over 100 students, mostly from Bilgi University, attended the first summer school. The Mathematics Village now houses over 160 students from all over Turkey at any one time, with more staying in tents. They pay a small fee to cover their food and accommodation, but, as they state on their website, the Mathematics Village has an "immutable principle never to refuse any student on a financial basis". It is a beautiful, peaceful environment, with amphitheatres, open-air lecture rooms, Turkish baths and a two-story library decorated with geometric mosaics. 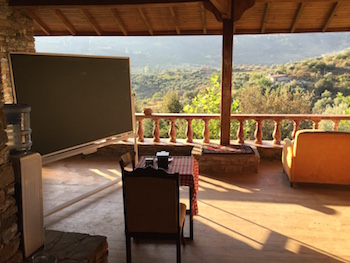 A lecture room at the Mathematics Village (Photo: Stephen Huggett)

Highschool students come for two weeks at a time. As well as do maths – graph theory, probability, combinatorics, game theory and basic analysis and algebra – they also help cook, clean, and look after the gardens. University students are taught (in English) by mathematicians visiting from all over the world. These mathematicians volunteer to lecture to the students, and are provided with food and lodging in return.

"I went there initially because it had been strongly recommended to me by friends, and I was curious. Then I went back because I had enjoyed it so much!" says Stephen Huggett, a professor from the University of Plymouth, who visited to teach "special relativity for mathematicians" for undergraduates and twistor geometry for postgraduate students. "The village is in a beautiful remote setting in the mountains, with long views. The buildings are in the lovely vernacular architecture, shaded by trees. They are simple and elegant, and separated only by footpaths. The atmosphere is friendly, tranquil, and perfect for conversation and study. There is no bureaucracy and there are no exams! The students are highly motivated and a pleasure to teach."

Nesin created this mathematical paradise despite significant economic and political challenges. The official resistance to the Mathematics Village is most likely because Ali Nesin's father was a prominent atheist, a controversial belief in religiously conservative Turkey. The architect of the Mathematics Village, Sevan Nisanyan, who is also a prominent atheist, was jailed for illegal construction in 2014. He escaped in 2017 and is living in Greece. Hundreds of other intellectuals across Turkey have also been arrested, and hundreds or thousands of scholars have fled Turkey.

But despite all this, on the hillside near Izmir, Nesin has created a haven for mathematical learning, creativity and joy. There are no tests or exams for the students of the Mathematics Village. Their website says that: "what is important is not to solve the problem, but to understand the problem." There is only an invitation to enjoy doing mathematics. And Nesin has given many hundreds of people – from high school students to research mathematicians – a chance to do just that.

This article is, in part, based on Julie Rehmeyer's lovely writeup on the Leelavati Prize on the IMU website. You can read more about the Mathematical Village in this article in the Notices of the AMS.