London tube strike not all bad?

Whether or not you support London Underground employees' right to strike, one thing seems clear: there is nothing good about a Tube strike from the commuters' point of view. But now some new research offers a bit of a silver lining. An analysis of the London Tube strike in February 2014 has found that, despite the inconvenience to tens of thousands of people, the strike actually produced a net economic benefit. It's due to the number of people who found more efficient ways to get to work. 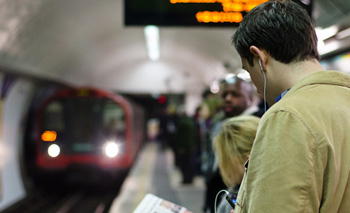 Economists from the University of Cambridge and the University of Oxford examined twenty days' worth of anonymised Oyster card data, containing more than 200 million data points, in order to see how individual Tube journeys changed during the strike. Since this particular strike only resulted in a partial closure of the Tube network so not all commuters were affected by the strike, it was possible to directly compared people who were effected and people who weren't. The data enabled the researchers to see whether people chose to go back to their normal commute once the strike was over, or if they found a more efficient route and decided to switch.

The researchers found that of the regular commuters affected by the strike, either because certain stations were closed or because travel times were considerably different, a significant fraction — about one in twenty — decided to stick with their new route once the strike was over. While the proportion may sound small, the researchers found that the strike actually ended up producing a net economic benefit. They performed a cost-benefit analysis of the amount of time saved by those who changed their daily commute, and found that the amount of time saved in the longer term actually outweighed the time lost by commuters during the strike. An Oxford working paper of their findings has been published online this week — it's appropriately titled The benefits of forced experimentation.

Part of the London Underground map. You can see a geographically accurate map here.

The London Tube map itself may have been a reason why many commuters did not find their optimal journey before the strike. The iconic map is not actually geographically accurate, rather it's a topological map in which only the connections between lines are represented faithfully. This was done on purpose, as the accurate map is a tangled mess that is hard to read (see here for more information). However, the distorted map doesn't represent distances between stations accurately, making it difficult for people to see how far they are actually travelling. By digitising the Tube map and comparing it to the actual distances between stations, the researchers found that those commuters living in, or travelling to, parts of London where distortion is greatest were more likely to have learned from the strike and found a more efficient route.

Additionally, since different Tube lines travel at different speeds, those commuters who had been travelling on one of the slower lines were also more likely to switch routes once the strike was over. "One of the things we're looking at is whether consumers usually make the best decision, but it's never been empirically tested using a large consumer dataset such as this one," says co-author Ferninand Rauch from Oxford's Department of Economics. "Our findings illustrate that people might get stuck with suboptimal decisions because they don't experiment enough."

According to the authors, being forced to alter a routine, whether that's due to a Tube strike or government regulation, can often lead to net benefits, as people or corporations are forced to innovate. In economics, this is known as the Porter hypothesis. "For the small fraction of commuters who found a better route, when multiplied over a longer period of time, the benefit to them actually outweighs the inconvenience suffered by many more," says co-author Shaun Larcom of Cambridge's Department of Land Economy. "The net gains came from the disruption itself."

"Given that a significant fraction of commuters on the London underground failed to find their optimal route until they were forced to experiment, perhaps we should not be too frustrated that we can't always get what we want, or that others sometimes take decisions for us," says co-author Tim Willems, also from Oxford's Department of Economics. "If we behave anything like London commuters and experiment too little, hitting such constraints may very well be to our long-term advantage."

This article has been adapted from a University of Cambridge press release.

This is very interesting - I'd like to know which are the slowest and which are the fastest tube lines! I'm guessing the older ones (Circle/District) would be slower than the newer (Jubilee), but would be good to have the facts.